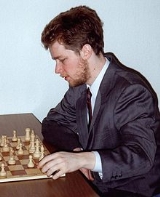 Encyclopedia
Alexander Valeryevich Khalifman (born January 18, 1966, in Leningrad
Saint Petersburg
Saint Petersburg is a city and a federal subject of Russia located on the Neva River at the head of the Gulf of Finland on the Baltic Sea...
) is a Soviet and Russian chess
Chess
Chess is a two-player board game played on a chessboard, a square-checkered board with 64 squares arranged in an eight-by-eight grid. It is one of the world's most popular games, played by millions of people worldwide at home, in clubs, online, by correspondence, and in tournaments.Each player...
Grandmaster of Jewish descent; he is also a former FIDE champion
World Chess Championship
The World Chess Championship is played to determine the World Champion in the board game chess. Men and women of any age are eligible to contest this title....
.

When Khalifman was 6 years old, he was taught chess by his father.

He gained the Grandmaster title in 1990 with one particularly good early result being his first place in the 1990 New York Open ahead of a host of strong players.

His most notable achievement was winning the FIDE World Chess Championship
FIDE World Chess Championship 1999
The FIDE World Chess Championship 1999 was held in Las Vegas, United States, between 31 July and 28 August 1999. The championship was won by Russian Alexander Khalifman, making him the FIDE World Chess Champion.-Format:...
in 1999, a title he held until the following year. He was rated
Elo rating system
The Elo rating system is a method for calculating the relative skill levels of players in two-player games such as chess. It is named after its creator Arpad Elo, a Hungarian-born American physics professor....
44th in the world at the time, which some compared unfavourably to "Classical" World Champion Garry Kasparov
Garry Kasparov
Garry Kimovich Kasparov is a Russian chess grandmaster, a former World Chess Champion, writer, political activist, and one of the greatest chess players of all time....
being rated #1. Khalifman said after the tournament, "Rating systems work perfectly for players who play only in round robin
Round-robin tournament
A round-robin tournament is a competition "in which each contestant meets all other contestants in turn".-Terminology:...
closed events. I think most of them are overrated. Organizers invite same people over and over because they have the same rating and their rating stays high". Perhaps in response, Khalifman was invited to the next Linares chess tournament
Linares chess tournament
The Linares International Chess Tournament , is an annual chess tournament, usually played around the end of February, takes its name from the city of Linares in the Jaén province of Andalusia, Spain, in which it is held...
, and performed credibly (though placing below joint winner Kasparov).

Khalifman holds the record of most consecutive games played at Aeroflot Open
Aeroflot Open
The Aeroflot Open is an annual open chess tournament played in Moscow and sponsored by the airline Aeroflot. It was established in 2002 and quickly grew to be the strongest open tournament. The first event had around 80 grandmasters, while in the second event 150 grandmasters participated...
tournament without a loss (72 games in eight tournaments — from 2004–2011).

With his trainer Genadi Nesis he runs a chess academy in St. Petersburg, called "The Grandmaster Chess School." There he trains players from all over the world following the motto: "chess = intellect + character."