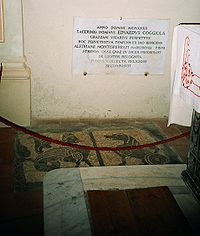 Aleram was the marquess of Montferrat and Liguria
Liguria
Liguria is a coastal region of north-western Italy, the third smallest of the Italian regions. Its capital is Genoa. It is a popular region with tourists for its beautiful beaches, picturesque little towns, and good food.-Geography:...
(the marca Aleramica) in Northern Italy until his death. He was son of William I of Montferrat and is mentioned in documents for the first time in 933 when he received a fief near Vercelli
Vercelli
Vercelli is a city and comune of about 47,000 inhabitants in the Province of Vercelli, Piedmont, northern Italy. One of the oldest urban sites in northern Italy, it was founded, according to most historians, around the year 600 BC.The city is situated on the river Sesia in the plain of the river...
by Hugh of Italy
Hugh of Italy
Hugh of Arles was King of Italy from 924 until his death. He was a Bosonid. During his reign, he empowered his relatives at the expense of the aristocracy and tried to establish a relationship with the Byzantine-Roman Empire...
. In 955 he was invested of lands in what is now the province of Alessandria
Province of Alessandria
The Province of Alessandria is an Italian province, with a population of some 430,000, which forms the southeastern part of the region of Piedmont. The provincial capital is the city of Alessandria....
.

In 958 he was appointed as marquess by Berengar II of Italy
Berengar II of Italy
Berengar of Ivrea , sometimes also referred to as Berengar II of Italy, was Margrave of Ivrea and usurper King of Italy from 950 until his deposition in 961, the last before Italy's incorporation into the Holy Roman Empire...
, whose daughter Gerberga he had married. Three years later, however, Aleram sided for emperor Otto I
Otto I, Holy Roman Emperor
Otto I the Great , son of Henry I the Fowler and Matilda of Ringelheim, was Duke of Saxony, King of Germany, King of Italy, and "the first of the Germans to be called the emperor of Italy" according to Arnulf of Milan...
, who gave him further lands in the Langhe
Langhe
The Langhe is a hilly area to the south and east of the river Tanaro in the province of Cuneo in Piedmont, northern Italy....
and from the Tanaro, the Orba
Orba
Orba may refer to:*Orba, Alicante, a town in eastern Spain*Orba , a torrential stream in northern Italy*Orba , a High King of Ireland...
and the Ligurian Sea
Ligurian Sea
The Ligurian Sea is an arm of the Mediterranean Sea, between the Italian Riviera and the island of Corsica. The sea is probably named after the ancient Ligures people.-Geography:...
. The new grants had been favoured by Adelaide of Burgundy
Adelaide of Italy
Saint Adelaide of Italy , also called Adelaide of Burgundy, was the second wife of Otto the Great, Holy Roman Emperor...
, wife of Otto I from 951 and previous wife of Lothair II
Lothair II of Italy
Lothair II , often Lothair of Arles, was the King of Italy from 948 to his death. He was of the noble Frankish lineage of the Bosonids, descended from Boso the Elder...
, and also daughter of Rudolph II of Burgundy
Rudolph II of Burgundy
Rudolph II was king of Upper Burgundy , Lower Burgundy , and Italy . He was the son of Rudolph I, king of Upper Burgundy, and it is presumed that his mother was his father's known wife, Guilla of Provence...
.

Aleramo had three sons from his first wife, one Adelaide: