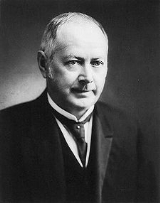 Encyclopedia
Albert Sidney Burleson was a United States Postmaster General
United States Postmaster General
The United States Postmaster General is the Chief Executive Officer of the United States Postal Service. The office, in one form or another, is older than both the United States Constitution and the United States Declaration of Independence...
and Congressman
United States Congress
The United States Congress is the bicameral legislature of the federal government of the United States, consisting of the Senate and the House of Representatives. The Congress meets in the United States Capitol in Washington, D.C....
. Born in San Marcos, Texas
San Marcos, Texas
San Marcos is a city in the U.S. state of Texas, and is the seat of Hays County. Located within the metropolitan area, the city is located on the Interstate 35 corridor—between Austin and San Antonio....
, he came from a wealthy Southern family. His father, Edward Burleson, Jr., was a Confederate
Confederate States of America
The Confederate States of America was a government set up from 1861 to 1865 by 11 Southern slave states of the United States of America that had declared their secession from the U.S...
officer. His grandfather, Edward Burleson
Edward Burleson
Edward Burleson was a soldier, general, and statesman in the state of Missouri, the Republic of Texas, and later the U.S. state of Texas....
, was a soldier and statesman in the Republic of Texas
Republic of Texas
The Republic of Texas was an independent nation in North America, bordering the United States and Mexico, that existed from 1836 to 1846.Formed as a break-away republic from Mexico by the Texas Revolution, the state claimed borders that encompassed an area that included all of the present U.S...
and early statehood Texas. In his early political career, Burleson represented Texas
Texas
Texas is the second largest U.S. state by both area and population, and the largest state by area in the contiguous United States.The name, based on the Caddo word "Tejas" meaning "friends" or "allies", was applied by the Spanish to the Caddo themselves and to the region of their settlement in...
in the House
United States House of Representatives
The United States House of Representatives is one of the two Houses of the United States Congress, the bicameral legislature which also includes the Senate.The composition and powers of the House are established in Article One of the Constitution...
, where he was active in promoting the development of agriculture
Agriculture
Agriculture is the cultivation of animals, plants, fungi and other life forms for food, fiber, and other products used to sustain life. Agriculture was the key implement in the rise of sedentary human civilization, whereby farming of domesticated species created food surpluses that nurtured the...
.

In 1913 he was appointed Postmaster General by Woodrow Wilson
Woodrow Wilson
Thomas Woodrow Wilson was the 28th President of the United States, from 1913 to 1921. A leader of the Progressive Movement, he served as President of Princeton University from 1902 to 1910, and then as the Governor of New Jersey from 1911 to 1913...
. To his credit, he initiated the parcel
Package delivery
Package delivery or parcel delivery is the shipping of packages or high value mail as single shipments. While the service is provided by most postal systems, private package delivery services have also existed in competition with and in place of public postal services.-Package delivery in the...
post and air mail services, increasing mail service to rural
Rural
Rural areas or the country or countryside are areas that are not urbanized, though when large areas are described, country towns and smaller cities will be included. They have a low population density, and typically much of the land is devoted to agriculture...
areas. However, Burleson was one of the most reactionary
Reactionary
The term reactionary refers to viewpoints that seek to return to a previous state in a society. The term is meant to describe one end of a political spectrum whose opposite pole is "radical". While it has not been generally considered a term of praise it has been adopted as a self-description by...
politicians to have served as Postmaster General, and for that reason (and several others) his term is often seen as one of the worst in the history of the post. Burleson persecuted African-Americans in the mail service, segregating workers and firing Southern black postal workers. He drew criticism from labor unions by forbidding postal employees to strike. Business leaders were angered by inefficiency and almost dictatorial heavy-handedness in government control of communications.

During World War I
World War I
World War I , which was predominantly called the World War or the Great War from its occurrence until 1939, and the First World War or World War I thereafter, was a major war centred in Europe that began on 28 July 1914 and lasted until 11 November 1918...
, Burleson vigorously enforced the Espionage Act, ordering local postmasters to send to him any illegal or suspicious material that they found. The movement of major radical pamphlets such as Emma Goldman
Emma Goldman
Emma Goldman was an anarchist known for her political activism, writing and speeches. She played a pivotal role in the development of anarchist political philosophy in North America and Europe in the first half of the twentieth century....
's Mother Earth
Mother Earth (magazine)
Mother Earth was an anarchist journal that described itself as "A Monthly Magazine Devoted to Social Science and Literature," edited by Emma Goldman. Alexander Berkman, another well-known anarchist, was the magazine's editor from 1907 to 1915...
and Max Eastman
Max Eastman
Max Forrester Eastman was an American writer on literature, philosophy and society, a poet, and a prominent political activist. For many years, Eastman was a supporter of socialism, a leading patron of the Harlem Renaissance and an activist for a number of liberal and radical causes...
's The Masses
The Masses
The Masses was a graphically innovative magazine of socialist politics published monthly in the U.S. from 1911 until 1917, when Federal prosecutors brought charges against its editors for conspiring to obstruct conscription. It was succeeded by The Liberator and then later The New Masses...
through the mail was slowed drastically, and often such pamphlets were never delivered. Anti-war material was banned from the mail.

Following the war, he continued to advocate permanent nationalization of telephone, telegraph and cable
Submarine communications cable
A submarine communications cable is a cable laid on the sea bed between land-based stations to carry telecommunication signals across stretches of ocean....
services, but acknowledging that Congress would be hostile to the idea, oversaw the return of the communications infrastructure to its various corporate owners. In 1919 he became chairman of the United States Telegraph and Telephone Administration and in 1920 chairman of the United States Commission to the International Wire Communication Conference, soon retiring in 1921. Burleson died of a heart attack and is buried in the Oakwood Cemetery
Oakwood Cemetery (Austin, TX)
Oakwood Cemetery, originally called City Cemetery, is the oldest city-owned cemetery in Austin, Texas. Situated on a hill just east of I-35 that overlooks downtown Austin, just north of the Swedish Hill Historic District and south of Disch-Falk Field, the once-isolated site is now in the center of...
in Austin, Texas
Austin, Texas
Austin is the capital city of the U.S. state of :Texas and the seat of Travis County. Located in Central Texas on the eastern edge of the American Southwest, it is the fourth-largest city in Texas and the 14th most populous city in the United States. It was the third-fastest-growing large city in...
.