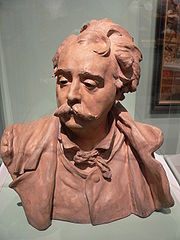 Albert-Ernest Carrier-Belleuse (June 12, 1824, Anizy-le-Château
Anizy-le-Château
Anizy-le-Château is a commune in the department of Aisne in Picardy in northern France.-Population:-References:*...
, Aisne
Aisne
Aisne is a department in the northern part of France named after the Aisne River.- History :Aisne is one of the original 83 departments created during the French Revolution on 4 March 1790. It was created from parts of the former provinces of Île-de-France, Picardie, and Champagne.Most of the old...
- June 4, 1887, Sèvres
Sèvres
Sèvres is a commune in the southwestern suburbs of Paris, France. It is located from the centre of Paris.The town is known for its porcelain manufacture, the Manufacture nationale de Sèvres, making the famous Sèvres porcelain, as well as being the location of the International Bureau of Weights...
) was a French
France
The French Republic , The French Republic , The French Republic , (commonly known as France , is a unitary semi-presidential republic in Western Europe with several overseas territories and islands located on other continents and in the Indian, Pacific, and Atlantic oceans. Metropolitan France...
sculptor and painter
Painting
Painting is the practice of applying paint, pigment, color or other medium to a surface . The application of the medium is commonly applied to the base with a brush but other objects can be used. In art, the term painting describes both the act and the result of the action. However, painting is...
.

Carrier-Belleuse was a student of David d'Angers and briefly at the École des Beaux-Arts
École des Beaux-Arts
École des Beaux-Arts refers to a number of influential art schools in France. The most famous is the École nationale supérieure des Beaux-Arts, now located on the left bank in Paris, across the Seine from the Louvre, in the 6th arrondissement. The school has a history spanning more than 350 years,...
. His career is distinguished by his versatility and his work outside France: in England between 1850 and 1855 (working for Mintons), and in Brussels around 1871. His name is perhaps best known because Auguste Rodin
Auguste Rodin
François-Auguste-René Rodin , known as Auguste Rodin , was a French sculptor. Although Rodin is generally considered the progenitor of modern sculpture, he did not set out to rebel against the past...
worked as his assistant between 1864 and 1870. The two travelled to Brussels
Brussels
Brussels , officially the Brussels Region or Brussels-Capital Region , is the capital of Belgium and the de facto capital of the European Union...
in 1871, and by some accounts Rodin assisted Carrier-Belleuse's architectural sculpture for the Brussels Stock Exchange
Brussels Stock Exchange
The Brussels Stock Exchange was founded in Brussels, Belgium, by Napoleonic decree in 1801. On September 22, 2000, the BSE merged with Paris Bourse, Lisbon Stock Exchange and the stock exchanges of Amsterdam, to form Euronext N.V., the first pan-European exchange for equities and derivatives,...
.

Carrier-Belleuse made many terra cotta
Terra cotta
Terracotta, Terra cotta or Terra-cotta is a clay-based unglazed ceramic, although the term can also be applied to glazed ceramics where the fired body is porous and red in color...
pieces, the most famous of which may be The Abduction of Hippodameia
The Abduction of Hippodameia
The Abduction of Hippodameia by the French sculptor Albert-Ernest Carrier-Belleuse is a classical subject blended with violent emotion, sensuality, and raw animal power....
depicting the Greek mythological scene of a centaur
Centaur
In Greek mythology, a centaur or hippocentaur is a member of a composite race of creatures, part human and part horse...
kidnapping Hippodameia on her wedding day. He was also made artistic director at the Manufacture nationale de Sèvres
Manufacture nationale de Sèvres
The manufacture nationale de Sèvres is a Frit porcelain porcelain tendre factory at Sèvres, France. Formerly a royal, then an imperial factory, the facility is now run by the Ministry of Culture.-Brief history:...
in 1876.

As a painter he produced many portraits and landscapes on the Côte d'Opale
Côte d'Opale
The French Opal Coast covers the seaside holiday area of the Pas de Calais, from Calais in the north to Berck in the south, but also extends to Le Crotoy...
, northern sea-borders facing England, chiefly in the village of Audresselles
Audresselles
Audresselles is a commune south of Cape Gris Nez in the Pas-de-Calais department in northern France.The commune covers about 2000 acres of cultivated lands, two beaches, and seashore cliffs...
. In 1862 Carrier-Belleuse was one of the founding members of the Société Nationale des Beaux-Arts, and was made an Officier of the Légion d'honneur
Légion d'honneur
The Legion of Honour, or in full the National Order of the Legion of Honour is a French order established by Napoleon Bonaparte, First Consul of the Consulat which succeeded to the First Republic, on 19 May 1802...
.