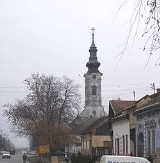 Encyclopedia
Ajka (ˈɒjkɒ) is a city in Hungary
Hungary
Hungary , officially the Republic of Hungary , is a landlocked country in Central Europe. It is situated in the Carpathian Basin and is bordered by Slovakia to the north, Ukraine and Romania to the east, Serbia and Croatia to the south, Slovenia to the southwest and Austria to the west. The...
with about 35,000 inhabitants. It is situated in the hills of Bakony
Bakony
Bakony is a mountainous region in Transdanubia, Hungary. It forms the largest part of the Transdanubian Mountains. It is located north of Lake Balaton and lies almost entirely in Veszprém county....
.

Around 1000 BCE the area was inhabited by Celts. By the 2nd century CE the territory was conquered by the Romans
Roman Empire
The Roman Empire was the post-Republican period of the ancient Roman civilization, characterised by an autocratic form of government and large territorial holdings in Europe and around the Mediterranean....
. The Hungarians occupied the area in the early 10th century.

The village Ajka was named after the Ajka clan, which, in turn, got its name after its ancestor, a knight named Heiko who was a member of the retinue of Gisela
Giselle of Bavaria
Blessed Gisela of Hungary was the first queen of Hungary.- Biography :Gisela was a daughter of Henry II, Duke of Bavaria and Gisela of Burgundy....
, Princess of Bavaria
Bavaria
Bavaria, formally the Free State of Bavaria is a state of Germany, located in the southeast of Germany. With an area of , it is the largest state by area, forming almost 20% of the total land area of Germany...
, wife of King St. Stephen in the early 11th century. The village itself was first mentioned in 1214 when it was already about a hundred years old.

The village developed slowly during the next few centuries. Real prosperity came only in the second half of the 19th century when coal resources were found nearby. In the 1930s vast bauxite
Bauxite
Bauxite is an aluminium ore and is the main source of aluminium. This form of rock consists mostly of the minerals gibbsite Al3, boehmite γ-AlO, and diaspore α-AlO, in a mixture with the two iron oxides goethite and hematite, the clay mineral kaolinite, and small amounts of anatase TiO2...
resources were found too. In 1937 the world's first krypton
Krypton
Krypton is a chemical element with the symbol Kr and atomic number 36. It is a member of Group 18 and Period 4 elements. A colorless, odorless, tasteless noble gas, krypton occurs in trace amounts in the atmosphere, is isolated by fractionally distilling liquified air, and is often used with other...
factory was built near Ajka.

During the industrialization wave of the Socialist Communist era Ajka was a natural choice to build a new industrial town. The new town – like several other industrial cities and towns – came into existence with the unification of several villages.
Today's Ajka was created on January 1, 1960 by the unification of four villages (Ajka, Bódé, Tósok and Tósokberénd). In the following decades four additional villages (Csékút, Bakonygyepes, Padragkút and Ajkarendek) were annexed to the town. At the time of the unification Ajka had 15.375 residents. Lot of workers came to Ajka to find a new job and home there. Most of the population is working class.

The political changes of 1989/90 affected the industry of the area, but Ajka quickly recovered and is now a prospering town.

The country is still renovating and replacing its aging infrastructure. Most renovation was completed by the Millennium , but some still need improvement or removal.

Hungary declared a state of emergency on October the 5th, 2010, after a flood of toxic sludge escaped from an aging alumina factory in Ajka killing 10 people, injuring 120 and flooding some 400 homes as it hit the nearby towns Kolontár
Kolontár
Kolontár is a village in Veszprém county, Hungary.- Soil pollution disaster :On 4 October 2010 a 1.5 - 4 meters-high wave of red mud flooded the village from a plant nearby causing nine deaths and several severe chemical burn injuries. Six bodies were found in the mud and other three victims died...
and Devecser
Devecser
Devecser is a town in Veszprém county, Hungary.In the Middle Ages there were five villages in the area of today's Devecser: Devecser, Kisdevecser, Szék, Meggyes and Patony. These villages expanded in the 12th and 13th century...
near the Ajkai Timföldgyár plant. The discharge was estimated at 6-700,000 cubic meters, of red and toxic industrial sludge that affected some 40 square kilometers.

Ajka is twinned
Town twinning
Twin towns and sister cities are two of many terms used to describe the cooperative agreements between towns, cities, and even counties in geographically and politically distinct areas to promote cultural and commercial ties.- Terminology :...
to these towns: Cristuru Secuiesc
Cristuru Secuiesc
Cristuru Secuiesc is a town in Harghita County, Romania. It lies in the Székely Land, an ethno-cultural region in eastern Transylvania.The town administers two villages:*Beteşti / Betfalva, part of Mugeni until 2004*Filiaş / Fiatfalva- History :...
, Romania
Romania
Romania is a country located at the crossroads of Central and Southeastern Europe, on the Lower Danube, within and outside the Carpathian arch, bordering on the Black Sea...
Rovaniemi
Rovaniemi
Rovaniemi is a city and municipality of Finland. It is the administrative capital and commercial centre of Finland's northernmost province, Lapland. It is situated close to the Arctic Circle and is between the hills of Ounasvaara and Korkalovaara, at the confluence of the Kemijoki River and its...
, Finland
Finland
Finland , officially the Republic of Finland, is a Nordic country situated in the Fennoscandian region of Northern Europe. It is bordered by Sweden in the west, Norway in the north and Russia in the east, while Estonia lies to its south across the Gulf of Finland.Around 5.4 million people reside...
Unna
Unna
Unna is a town of around 67,000 people in North Rhine-Westphalia, Germany, the seat of the Unna district.-Geography:Unna is situated on an ancient salt-trading route, the Hellweg road. Trade on this route and during the period of the Hansa Trade Route came from as far as London...
, Germany
Germany
Germany , officially the Federal Republic of Germany , is a federal parliamentary republic in Europe. The country consists of 16 states while the capital and largest city is Berlin. Germany covers an area of 357,021 km2 and has a largely temperate seasonal climate...
Weiz
Weiz
Weiz is a small town of 9,445 inhabitants in the eastern part of Styria, Austria.Its partner city is Grodzisk Mazowiecki, Poland...
, Austria
Austria
Austria , officially the Republic of Austria , is a landlocked country of roughly 8.4 million people in Central Europe. It is bordered by the Czech Republic and Germany to the north, Slovakia and Hungary to the east, Slovenia and Italy to the south, and Switzerland and Liechtenstein to the...