Encyclopedia
Aix-les-Bains is a commune
Communes of France
The commune is the lowest level of administrative division in the French Republic. French communes are roughly equivalent to incorporated municipalities or villages in the United States or Gemeinden in Germany...
in the Savoie
Savoie
Savoie is a French department located in the Rhône-Alpes region in the French Alps.Together with the Haute-Savoie, Savoie is one of the two departments of the historic region of Savoy that was annexed by France on June 14, 1860, following the signature of the Treaty of Turin on March 24, 1860...
department in the Rhône-Alpes
Rhône-Alpes
Rhône-Alpes is one of the 27 regions of France, located on the eastern border of the country, towards the south. The region was named after the Rhône River and the Alps mountain range. Its capital, Lyon, is the second-largest metropolitan area in France after Paris...
region
Régions of France
France is divided into 27 administrative regions , 22 of which are in Metropolitan France, and five of which are overseas. Corsica is a territorial collectivity , but is considered a region in mainstream usage, and is even shown as such on the INSEE website...
in south-eastern France
France
The French Republic , The French Republic , The French Republic , (commonly known as France , is a unitary semi-presidential republic in Western Europe with several overseas territories and islands located on other continents and in the Indian, Pacific, and Atlantic oceans. Metropolitan France...
.

It is situated on the shore of Lac du Bourget
Lac du Bourget
The lac du Bourget is a lake in the Savoie department of France. It is the largest and the deepest lake located entirely within France. The most important town on its shore is Aix-les-Bains. Chambéry, the capital of Savoie, lies about 10 km south of the lake. The lake is named after the town Le...
, 9 km (5.6 mi) by rail north of Chambéry
Chambéry
Chambéry is a city in the department of Savoie, located in the Rhône-Alpes region in southeastern France.It is the capital of the department and has been the historical capital of the Savoy region since the 13th century, when Amadeus V of Savoy made the city his seat of power.-Geography:Chambéry...
.

The town lies at an altitude of about 250 m and stretches along the eastern end of Lac du Bourget and up the slopes above the lake that culminate in the Tour de L'Angle Est that overlooks the town and lake at a height of 1562 m (5,124.67 ft). The western shore of the lake is narrower as the mountains along its edge are closer to the lakeshore, although lower than those on the eastern side.
The lake drains out of its northern end into the Rhone river about 5 km to the north.
Aix-les-Bains is situated in the hilly country of the Bugey that makes up the foothills of the Alps and also forms part of the lower western extension of the Jura Mountains
Jura mountains
The Jura Mountains are a small mountain range located north of the Alps, separating the Rhine and Rhone rivers and forming part of the watershed of each...
.

Aix derives from Latin
Latin
Latin is an Italic language originally spoken in Latium and Ancient Rome. It, along with most European languages, is a descendant of the ancient Proto-Indo-European language. Although it is considered a dead language, a number of scholars and members of the Christian clergy speak it fluently, and...
Aquae (literally, "waters"; cf Aix-la-Chapelle (Aachen) or Aix-en-Provence
Aix-en-Provence
Aix , or Aix-en-Provence to distinguish it from other cities built over hot springs, is a city-commune in southern France, some north of Marseille. It is in the region of Provence-Alpes-Côte d'Azur, in the département of Bouches-du-Rhône, of which it is a subprefecture. The population of Aix is...
), and Aix was a bath during the Roman Empire
Roman Empire
The Roman Empire was the post-Republican period of the ancient Roman civilization, characterised by an autocratic form of government and large territorial holdings in Europe and around the Mediterranean....
, even before it was renamed Aquae Gratianae to commemorate the Emperor Gratian, who was assassinated not far away, in Lyon
Lyon
Lyon , is a city in east-central France in the Rhône-Alpes region, situated between Paris and Marseille. Lyon is located at from Paris, from Marseille, from Geneva, from Turin, and from Barcelona. The residents of the city are called Lyonnais....
, in 383. Numerous Roman ruins survive. 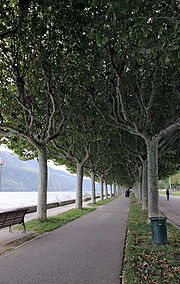 The Faure Museum
Faure Museum (Aix-les-Bains)
The Faure Museum is an art museum situated at Aix-les-Bains in France in the department of Savoie. It is a museum of France, according to the law n°2002-5 of January 4, 2002. It was founded in 1949 and comprised initially artworks from the private collection of Doctor Jean Faure , bequeathed to...
, an art museum is situated at Aix-les-Bains. It was founded in 1949 and comprised the second collection in France of works from Rodin
Rodin
- People :* Auguste Rodin , French sculptor, for whom is named:** The Musée Rodin in Paris, France** The Rodin Museum in Philadelphia, Pennsylvania, USA** The Rodin Gallery in Seoul, South Korea** Rodin , a crater on the Moon...
and the second collection of impressionist paintings of France.

The hot sulphur
Sulfur
Sulfur or sulphur is the chemical element with atomic number 16. In the periodic table it is represented by the symbol S. It is an abundant, multivalent non-metal. Under normal conditions, sulfur atoms form cyclic octatomic molecules with chemical formula S8. Elemental sulfur is a bright yellow...
springs have a temperature of ranging between 42-45° Celsius and are still frequented. They are used for drinking as well as for hydrotherapy
Hydrotherapy
Hydrotherapy, formerly called hydropathy, involves the use of water for pain-relief and treating illness. The term hydrotherapy itself is synonymous with the term water cure as it was originally marketed by practitioners and promoters in the 19th century...
.

Aix-les-Bains is twinned
Town twinning
Twin towns and sister cities are two of many terms used to describe the cooperative agreements between towns, cities, and even counties in geographically and politically distinct areas to promote cultural and commercial ties.- Terminology :...
with: Kislovodsk
Kislovodsk
Kislovodsk is a city in Stavropol Krai, Russia, which lies in the North Caucasian region of the country, between the Black and Caspian Seas. The closest airport is located in the city of Mineralnye Vody. Population:...
, Russia
Russia
Russia or , officially known as both Russia and the Russian Federation , is a country in northern Eurasia. It is a federal semi-presidential republic, comprising 83 federal subjects...
Milena
Milena
Milena is a comune in the Province of Caltanissetta in the Italian region Sicily, located about 80 km southeast of Palermo and about 30 km west of Caltanissetta...
, Italy
Italy
Italy , officially the Italian Republic languages]] under the European Charter for Regional or Minority Languages. In each of these, Italy's official name is as follows:;;;;;;;;), is a unitary parliamentary republic in South-Central Europe. To the north it borders France, Switzerland, Austria and...
Moulay Yacoub
Moulay Yacoub Prefecture
Moulay Yacoub is one of the provinces of Fès-Boulemane region of Morocco. It had a population of 150,422 as per the 2004 census report. "Moulay Yacoub" is also the name of a town within the prefecture. The thermal Moulay Yacoub Spring is near the town....
, Morocco
Morocco
Morocco , officially the Kingdom of Morocco , is a country located in North Africa. It has a population of more than 32 million and an area of 710,850 km², and also primarily administers the disputed region of the Western Sahara...
Fairbanks
Fairbanks, Alaska
Fairbanks is a home rule city in and the borough seat of the Fairbanks North Star Borough in the U.S. state of Alaska.Fairbanks is the largest city in the Interior region of Alaska, and second largest in the state behind Anchorage...
, USA