Encyclopedia
Agus River is a river that flows for 36.5 km from Lanao Lake to Iligan Bay
Iligan Bay
Iligan Bay is a bay in Mindanao in the Philippines. It is part of Bohol Sea and cuts into the northern portion of the island of Mindanao. The provinces along its coast are Misamis Occidental, Misamis Oriental, Zamboanga del Sur, and Lanao del Norte. Iligan City is the most important port on Iligan...
, Philippines
Philippines
The Philippines , officially known as the Republic of the Philippines , is a country in Southeast Asia in the western Pacific Ocean. To its north across the Luzon Strait lies Taiwan. West across the South China Sea sits Vietnam...
. It cuts through the provinces of Lanao del Sur
Lanao del Sur
Lanao del Sur is a province of the Philippines located in the Autonomous Region in Muslim Mindanao . Its capital is Marawi City and borders Lanao del Norte to the north, Bukidnon to the east, and Maguindanao and Cotabato to the south. To the southwest lies Illana Bay, an arm of the Moro Gulf...
and Lanao del Norte
Lanao del Norte
Lanao del Norte is a province of the Philippines located in the Northern Mindanao region. Its capital is Tubod. The province borders Lanao del Sur to the southeast, Zamboanga del Sur to the west, Illana Bay to the southwest, Iligan Bay to the north, Iligan City to the northeast, and is separated...
. Settlements along the banks of the river include the City of Marawi, the Municipality of Linamon
Linamon, Lanao del Norte
Linamon is a 5th class municipality in the province of Lanao del Norte, Philippines. According to the 2007 census, it has a population of 16,340 people. Historically, Linamon was a barangay of Iligan City.-Geography:...
and the City of Iligan
Iligan City
The City of Iligan is a highly urbanized industrial city north of the province of Lanao del Norte, Philippines, and the province's former capital. It is approximately 795 kilometers southeast of Manila...
. It separates into two channels as it drains to Iligan Bay; one going over the Maria Cristina Falls
María Cristina Falls
Maria Cristina Falls is a waterfall of the Agus River on the island of Mindanao. It is sometimes called the "twin falls" as the flow is separated by a rock at the brink of the waterfall. It is a landmark of Iligan City, nicknamed the City of Majestic Waterfalls, because of the presence of more...
while the other supplies the Linamon Falls. The river descends for about 2200 feet (670.6 m) from its source as it flows for 21 miles (33.8 km) before draining to the sea. The river is relatively shallow as it is only 4 feet (1.2 m) deep in some areas. The Agus River's watershed spans about 11,320.00 hectares. In 1992, the National Power Corporation financed the reforestation of the Lake Lanao-Agus River watershed, planting over 1500 hectares of Acacia mangium
Acacia mangium
Acacia mangium is a species of flowering tree in the pea family, Fabaceae, that is native to northeastern Queensland in Australia, the Western Province of Papua New Guinea, Papua, and the eastern Maluku Islands. Common names include Black Wattle, Hickory Wattle and Mangium...
, Durio zibethinus and other indigenous trees. It has a discharge of about 10 second-meters and flows from a narrow depression off the northwestern rim of the lake and flows over a basalt rock formation. The canyon carved by the river suggests a short erosional period. 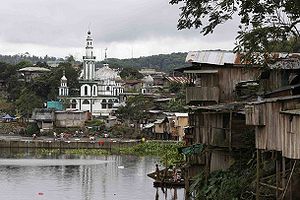 The lake and the river are used for both commercial and sport fishing, as well as for recreational activities such as boating and swimming. The river in its entirety, however, is not navigable because the current in some areas reaches a velocity of up to thirty miles an hour. Together with Lanao Lake, the Agus River generates 70% of the electricity used in Mindanao due to the hydroelectric plants in the river and Maria Cristina Falls. However, the hydroelectric plants and the requisite regulatory dams have changed the fluctuations of the water level of Lake Lanao, affecting the indigenous people, producing conflicts with the local population.

In Maranao
Maranao
Maranao is the term used for the people of Lanao, a predominantly Muslim region in the Philippines island of Mindanao. They are famous for their artwork, sophisticated weaving, wood and metal craft, and their epic literature...
mythology, Lake Lanao once threatened to drown the people of Sebangan with its ever-rising waters. The Archangel Gabriel is thought to have made the Agus river in order to drain the lake.
The source of this article is wikipedia, the free encyclopedia.  The text of this article is licensed under the GFDL.