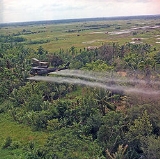 Overview
Agent Orange is the code name for one of the herbicide
Herbicide
Herbicides, also commonly known as weedkillers, are pesticides used to kill unwanted plants. Selective herbicides kill specific targets while leaving the desired crop relatively unharmed. Some of these act by interfering with the growth of the weed and are often synthetic "imitations" of plant...
s and defoliant
Defoliant
A defoliant is any chemical sprayed or dusted on plants to cause its leaves to fall off. A classic example of a highly toxic defoliant is Agent Orange, which the United States armed forces used abundantly to defoliate regions of Vietnam during the Vietnam War from 1961 to 1970.Defoliants differ...
s used by the U.S. military
United States armed forces
The United States Armed Forces are the military forces of the United States. They consist of the Army, Navy, Marine Corps, Air Force, and Coast Guard.The United States has a strong tradition of civilian control of the military...
as part of its herbicidal warfare
Herbicidal warfare
Herbicidal warfare is a form of Chemical warfare in which the objective is to destroy the plant-based ecosystem of an area. In contrast to other forms, its use is not prohibited by international agreement...
program, Operation Ranch Hand
Operation Ranch Hand
Operation Ranch Hand was a U.S. Military operation during the Vietnam War, lasting from 1962 until 1971. It was part of the overall herbicidal warfare program during the war called "Operation Trail Dust"...
, during the Vietnam War
Vietnam War
The Vietnam War was a Cold War-era military conflict that occurred in Vietnam, Laos, and Cambodia from 1 November 1955 to the fall of Saigon on 30 April 1975. This war followed the First Indochina War and was fought between North Vietnam, supported by its communist allies, and the government of...
from 1961 to 1971. Vietnam estimates 400,000 people were killed or maimed, and 500,000 children born with birth defects.

A 50:50 mixture of 2,4,5-T and 2,4-D, it was manufactured for the U.S. Department of Defense primarily by Monsanto Corporation and Dow Chemical.

My husband died from stomch cancer 17 years ago and was in vietnam in 1968 and 1969. His doctors wanted to know if he was in vietnam because the type...
More