Encyclopedia
Aerodynamic drag is the fluid drag force
Drag (physics)
In fluid dynamics, drag refers to forces which act on a solid object in the direction of the relative fluid flow velocity...
that acts on any moving solid body in the direction of the fluid freestream
Freestream
The freestream is the air far upstream of an aerodynamic body, that is, before the body has a chance to deflect, slow down or compress the air. Freestream conditions are usually denoted with a \infty symbol, e.g. V_\infty, meaning the freestream velocity...
flow. From the body's perspective (near-field approach), the drag comes from forces due to pressure distributions over the body surface, symbolized

, and forces due to skin friction, which is a result of viscosity, denoted

. Alternatively, calculated from the flowfield perspective (far-field approach), the drag force comes from three natural phenomena: shock waves
Shock Waves
Shock Waves, , is a 1977 horror movie written and directed by Ken Wiederhorn...
, vortex sheet and viscosity
Viscosity
Viscosity is a measure of the resistance of a fluid which is being deformed by either shear or tensile stress. In everyday terms , viscosity is "thickness" or "internal friction". Thus, water is "thin", having a lower viscosity, while honey is "thick", having a higher viscosity...
.

The pressure distribution over the body surface exerts normal forces which, summed and projected into the freestream direction, represent the drag force due to pressure

. The nature of these normal forces combines shock wave effects, vortex system generation effects and wake viscous mechanisms all together.

When the viscosity effect over the pressure distribution is considered separately, the remaining drag force is called pressure (or form) drag. In the absence of viscosity, the pressure forces on the vehicle cancel each other and, hence, the drag is zero. Pressure drag is the dominant component in the case of vehicles with regions of separated flow, in which the pressure recovery is fairly ineffective.

The friction drag force, which is a tangential force on the aircraft surface, depends substantially on boundary layer configuration and viscosity. The calculated friction drag

utilizes the x-projection of the viscous stress tensor evaluated on each discretized body surface.

The sum of friction drag and pressure (form) drag is called viscous drag. This drag component takes into account the influence of viscosity. In a thermodynamic perspective, viscous effects represent irreversible phenomena and, therefore, they create entropy. The calculated viscous drag

use entropy changes to accurately predict the drag force.

When the airplane produces lift, another drag component comes in. Induced drag, symbolized

, comes about due to a modification on the pressure distribution due to the trailing vortex system that accompanies the lift production. Induced drag tends to be the most important component for airplanes during take-off or landing flight. Other drag component, namely wave drag,

, comes about from shock waves in transonic and supersonic flight speeds. The shock waves induce changes in the boundary layer and pressure distribution
over the body surface. It is worth noting that not only viscous effects but also shock waves induce irreversible phenomena and, as a consequence, they can be measured through entropy changes along the domain as well. The figure below is a summary of the various aspects previously discussed. 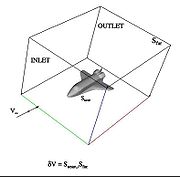 which surrounds the body represents the union of two unconnected surfaces,

is the airplane surface,

is the outlet surface and

represents both the lateral and inlet surfaces. In general, the far-field control volume is located in the boundaries of the domain

and its choice is user-defined. In Subsection \ref{sGF}, further considerations concerning to the correct selection of the far-field boundary are given, allowing for desired flow characteristics.

Equation (\ref{ta1}) can be decomposed into two surface integrals, yielding