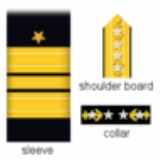 Admiral of the Navy is a rank in the United States Navy
United States Navy
The United States Navy is the naval warfare service branch of the United States Armed Forces and one of the seven uniformed services of the United States. The U.S. Navy is the largest in the world; its battle fleet tonnage is greater than that of the next 13 largest navies combined. The U.S...
that has only been held once in history, by George Dewey
George Dewey
George Dewey was an admiral of the United States Navy. He is best known for his victory at the Battle of Manila Bay during the Spanish-American War...
. In recognition of his victory at Manila Bay
Battle of Manila Bay (1898)
The Battle of Manila Bay took place on 1 May 1898, during the Spanish-American War. The American Asiatic Squadron under Commodore George Dewey engaged and destroyed the Spanish Pacific Squadron under Admiral Patricio Montojo y Pasarón...
in 1898, Congress authorized a single officer to hold the rank of Admiral
Admiral
Admiral is the rank, or part of the name of the ranks, of the highest naval officers. It is usually considered a full admiral and above vice admiral and below admiral of the fleet . It is usually abbreviated to "Adm" or "ADM"...
, and promoted Dewey to this rank in March 1899. By a Congressional Act of March 24, 1903, Dewey's rank was established as Admiral of the Navy, effective retroactive to March 1899. The text of the act read as follows:

Be it enacted by the Senate and the House of Representatives of the United States of America in Congress assembled, That the President is hereby authorized to appoint, by selection and promotion, an Admiral of the Navy, who shall not be placed upon the retired list except upon his own application; and whenever such office shall be vacated by death or otherwise the office shall cease to exist.

The rank Admiral of the Navy was seen as a six-star rank during World War II
World War II
World War II, or the Second World War , was a global conflict lasting from 1939 to 1945, involving most of the world's nations—including all of the great powers—eventually forming two opposing military alliances: the Allies and the Axis...
, with the establishment of the rank of five-star Fleet Admiral
Fleet Admiral (U.S.)
Fleet Admiral of the United States Navy, or more commonly referred to as Fleet Admiral , is a five-star flag officer rank, and it is considered to be the highest possible rank attainable in the United States Navy. Fleet Admiral ranks immediately above admiral and is equivalent to General of the...
. It was during this time that the Department of the Navy specified that the new 1944 version of the rank of Fleet Admiral was to be junior to Dewey's rank of Admiral of the Navy. During the preparations for the invasion of Japan, a proposal was raised by the Navy Department to appoint Chester Nimitz
Chester Nimitz
Fleet Admiral Chester William Nimitz, GCB, USN was a five-star admiral in the United States Navy. He held the dual command of Commander in Chief, United States Pacific Fleet , for U.S. naval forces and Commander in Chief, Pacific Ocean Areas , for U.S...
to the rank of Admiral of the Navy, or grant him some equivalent rank. The proposal, however, was dropped after the Japanese surrender.
The source of this article is wikipedia, the free encyclopedia.  The text of this article is licensed under the GFDL.