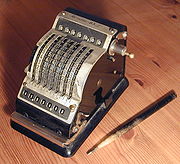 Blaise Pascal
Blaise Pascal
Blaise Pascal , was a French mathematician, physicist, inventor, writer and Catholic philosopher. He was a child prodigy who was educated by his father, a tax collector in Rouen...
invented the mechanical calculator in 1642; it was an adding machine that could perform additions and subtractions directly and multiplication and divisions by repetitions. He was followed by Thomas de Colmar who launched the mechanical calculator industry in 1851 when he released his simplified arithmometer
Arithmometer
An Arithmometer or Arithmomètre was a mechanical calculator that could add and subtract directly and could perform long multiplications and divisions effectively by using a movable accumulator for the result. Patented in France by Thomas de Colmar in 1820 and manufactured from 1851 to 1915, it...
(it took him thirty years to turn his complex multiplying machine, patented in 1820, into a simpler and more reliable adding machine). However they didn't gain widespread use until Dorr E. Felt
Dorr Felt
Dorr Eugene Felt was an American inventor and industrialist who was known for having invented the Comptometer, an early computing device, and the Comptograph, the first printing adding machine....
started manufacturing his comptometer (1887) and Burroughs
William Seward Burroughs I
William Seward Burroughs I was an American inventor born in Rochester, New York.Burroughs was the son of a mechanic and worked with machines throughout his childhood. While he was still a small boy, his parents moved to Auburn, New York, where he and his brothers were educated in the public school...
started the commercialization of his adding machine (1892).

To add a new list of numbers and arrive at a total, the user was first required to "Zero" the machine. Then, to add sets of numbers, the user was required to press numbered keys on a keyboard, which would remain depressed (rather than immediately rebound like the keys of a computer keyboard or typewritter or the buttons of a typical modern machine). The user would then pull the crank, which caused the numbers to be shown on the rotary wheels, and the keys to be released (i.e. to pop back up) in preparation for the next input. To add, for example, the amounts of A£30.72 and A£4.00 (which, in adding machine terms, on a decimal adding machine is 3,072 plus 400 "decimal units"), the following process took place: Press the 3 key in the column fourth from the right (multiples of one thousand), the 7 key in the column 2nd from right (multiples of ten) and the 2 key in the right hand (multiples of 1). Pull the crank. The rotary wheels now showed 3072. Press the 4 key in the 3rd column from the right. Pull the crank. The rotary wheels now show a running 'total' of 3472 which, when interpreted using the decimal currency colour coding of the key columns, equates to A£34.72. Keyboards typically did not have or need "0" (zero) keys. Trailing zeros (those to the right of a number such as the one to the right of the 3 in the example), were there by default because when a machine was "Zero-ed", all numbers visible on the rotary wheels were reset to zero.

Subtraction was impossible, except by adding the complement
Method of complements
In mathematics and computing, the method of complements is a technique used to subtract one number from another using only addition of positive numbers. This method was commonly used in mechanical calculators and is still used in modern computers...
of a number (for instance, subtract A£2.50 by adding A£9,997.50).

A later adding machine, called the comptometer
Comptometer
The comptometer was the first commercially successful key-driven mechanical calculator, patented in the USA by Dorr E. Felt in 1887.A key-driven calculator is extremely fast because each key adds or subtracts its value to the accumulator as soon as it is pressed and a skilled operator can enter all...
, did not require that a crank be pulled to add. Numbers were input simply by pressing keys. The machine was thus driven by finger power. Multiplication was similar to that on the adding machine, but users would "form" up their fingers over the keys to be pressed and press them down the multiple of times required. Using the above example, four fingers would be used to press down twice on the 3 (fourth column),4 (third column), 7(second column) and 2 (first column) keys. That finger shape would then move left two columns and press once. Usually a small crank near the wheels would be used to zero them.

Some adding machines were electromechanical — an old-style mechanism, but driven by electric power.

Some "ten-key" machines had input of numbers as on a modern calculator
Calculator
An electronic calculator is a small, portable, usually inexpensive electronic device used to perform the basic operations of arithmetic. Modern calculators are more portable than most computers, though most PDAs are comparable in size to handheld calculators.The first solid-state electronic...
-- 30.72 was input as "3", "0", "7", "2". These machines could subtract as well as add. Some could multiply and divide, although including these operations made the machine more complex. Those that could multiply, used a form of the old adding machine multiplication method. Using the previous example of multiplying A£34.72 by 102, the amount was keyed in, then the 2 key in the "multiplication" key column was pressed. The machine cycled twice, then tabulated the adding mechanism below the keyboard one column to the right. The number keys remained locked down on the keyboard. The user now pressed the multiplication "0" key which caused tabulation of the adding mechanism one more column to the right, but did not cycle the machine. Now the user pressed the multiplication "1" key. The machine cycled once. To see the total the user was required to press a "Total" key and the machine would print the result on a paper tape, release the locked down keys, reset the adding mechanism to zero and tabulate it back to its home position.

Modern adding machines are like simple calculators. They often have a different input system, though.

Note: Sometimes the adding machine will have a key labeled * instead of T. In this case, substitute * for T in the examples above. Alternatively, the plus key may continuously total instead of either a * or T key. Sometimes, the plus key is even labeled thus: +/= 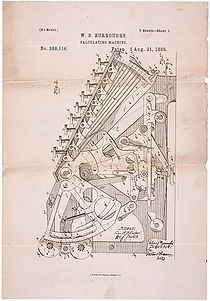 William Seward Burroughs
William Seward Burroughs I
William Seward Burroughs I was an American inventor born in Rochester, New York.Burroughs was the son of a mechanic and worked with machines throughout his childhood. While he was still a small boy, his parents moved to Auburn, New York, where he and his brothers were educated in the public school...
received a patent for his adding machine on August 21, 1888. He was a founder of American Arithmometer Company, which became Burroughs Corporation and evolved to produce electronic billing machines and mainframes, and eventually merged with Sperry
Sperry Corporation
Sperry Corporation was a major American equipment and electronics company whose existence spanned more than seven decades of the twentieth century...
to form Unisys
Unisys
Unisys Corporation , headquartered in Blue Bell, Pennsylvania, United States, and incorporated in Delaware, is a long established business whose core products now involves computing and networking.-History:...
. The grandson of the inventor of the adding machine is Beat
Beat generation
The Beat Generation refers to a group of American post-WWII writers who came to prominence in the 1950s, as well as the cultural phenomena that they both documented and inspired...
author William S. Burroughs
William S. Burroughs
William Seward Burroughs II was an American novelist, poet, essayist and spoken word performer. A primary figure of the Beat Generation and a major postmodernist author, he is considered to be "one of the most politically trenchant, culturally influential, and innovative artists of the 20th...
; a collection of his essays is called The Adding Machine.
The source of this article is wikipedia, the free encyclopedia.  The text of this article is licensed under the GFDL.