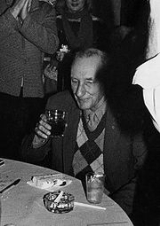 Overview
William Seward Burroughs II (icon; also known by his pen name
Pen name
A pen name, nom de plume, or literary double, is a pseudonym adopted by an author. A pen name may be used to make the author's name more distinctive, to disguise his or her gender, to distance an author from some or all of his or her works, to protect the author from retribution for his or her...
William Lee; 5 February 1914 – ) was an American novelist, poet, essayist  and spoken word
Spoken word
Spoken word is a form of poetry that often uses alliterated prose or verse and occasionally uses metered verse to express social commentary. Traditionally it is in the first person, is from the poet’s point of view and is themed in current events....
performer. A primary figure of the Beat Generation
Beat generation
The Beat Generation refers to a group of American post-WWII writers who came to prominence in the 1950s, as well as the cultural phenomena that they both documented and inspired...
and a major postmodernist
Postmodern literature
The term Postmodern literature is used to describe certain characteristics of post–World War II literature and a reaction against Enlightenment ideas implicit in Modernist literature.Postmodern literature, like postmodernism as a whole, is hard to define and there is little agreement on the exact...
author, he is considered to be "one of the most politically trenchant, culturally influential, and innovative artists of the 20th century." His influence is considered to have affected a range of popular culture as well as literature.

A ghost in daylight on a crowded street.

"Letter from a Master Addict to Dangerous Drugs", written in 1956, first published in The British Journal of Addiction, Vol. 52, No. 2 (January 1957), p. 1 and later used as footnotes in Naked Lunch|Naked Lunch

Communication must become total and conscious before we can stop it.

1. Never give anything away for nothing. 2. Never give more than you have to (always catch the buyer hungry and always make him wait). 3. Always take back everything if you possibly can.

On drug dealing, quoted in The Daily Telegraph (1964)

You know, they ask me if I were on a desert island and I knew nobody would ever see what I wrote, would I go on writing. My answer is most emphatically yes. I would go on writing for company. Because I'm creating an imaginary — it's always imaginary — world in which I would like to live.

The hallucinogens produce visionary states, sort of, but morphine and its derivatives decrease awareness of inner processes, thoughts and feelings. They are pain killers; pure and simple. They are absolutely contraindicated for creative work, and I include in the lot alcohol, morphine, barbiturates, tranquilizers — the whole spectrum of sedative drugs.

Quoted in interview, The Paris Review (Fall 1965), in response to "The visions of drugs and the visions of art don't mix?"

A paranoid man is a man who knows a little about what's going on.

As a young child Audrey Carsons wanted to be writers because writers were rich and famous. They lounged around Singapore and Rangoon smoking opium in a yellow pongee silk suit. They sniffed cocaine in Mayfair and they penetrated forbidden swamps with a faithful native boy and lived in the native quarter of Tangier smoking hashish and languidly caressing a pet gazelle.