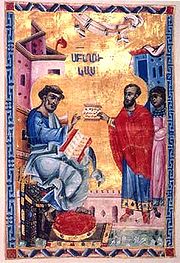 The Acts of the Apostles is a genre
Genre
Genre , Greek: genos, γένος) is the term for any category of literature or other forms of art or culture, e.g. music, and in general, any type of discourse, whether written or spoken, audial or visual, based on some set of stylistic criteria. Genres are formed by conventions that change over time...
of Early Christian literature, recounting the lives and works of the apostles of Jesus
Jesus
Jesus of Nazareth , commonly referred to as Jesus Christ or simply as Jesus or Christ, is the central figure of Christianity...
. The Acts are important for many reasons, one of them being the concept of apostolic succession
Apostolic Succession
Apostolic succession is a doctrine, held by some Christian denominations, which asserts that the chosen successors of the Twelve Apostles, from the first century to the present day, have inherited the spiritual, ecclesiastical and sacramental authority, power, and responsibility that were...
. They also provide insight into the valuation of "missionary activities among the exotic races," since some of them feature missionary work done among, for instance, the Cynocephaly
Cynocephaly
The condition of cynocephaly, having the head of a dog — or of a jackal— is a widely attested mythical phenomenon existing in many different forms and contexts.-Etymology:...
.