Encyclopedia
Acanthostega is an extinct labyrinthodont genus, among the first vertebrate animals to have recognizable limbs
Limb (anatomy)
A limb is a jointed, or prehensile , appendage of the human or other animal body....
. It appeared in the Upper Devonian
Devonian
The Devonian is a geologic period and system of the Paleozoic Era spanning from the end of the Silurian Period, about 416.0 ± 2.8 Mya , to the beginning of the Carboniferous Period, about 359.2 ± 2.5 Mya...
(Famennian) about 365 million years ago, and was anatomically intermediate between lobe-finned fishes and the first tetrapods fully capable of coming onto land.

It had eight digits
Polydactyly in early tetrapods
Polydactyly in early tetrapod aquatic animals is not to be confused with polydactyly in the medical sense, i.e., it was not an anomaly in the sense it was not a condition of having more than the typical number of digits for a given taxon. The condition appear to have arisen from a limb with a fin...
on each hand (the number of digits on the feet is unclear) linked by webbing, it lacked wrists, and was generally poorly adapted to come onto land. Acanthostega also had a remarkably fish-like shoulder and forelimb. The front foot of Acanthostega could not bend forward at the elbow, and thus could not be brought into a weight bearing
Weight bearing
In orthopedics, weight-bearing is the amount of weight a patient puts on the leg on which surgery has been performed. In general, it is described as a percentage of the body weight, because each leg of a healthy person carries the full body weight when walking, in an alternating fashion.After...
position, appearing to be more suitable for paddling or for holding on to aquatic plants. It had lungs, but its ribs were too short to give support to its chest cavity out of water, and it also had gills which were internal and covered like those of fish, not external and naked like those of some modern amphibians which are almost wholly aquatic. Acanthostega is the first tetrapod to show the shift in locomotory dominance from the pectoral to pelvic girdle. There are many morphological changes that allowed the pelvic girdle of Acanthostega to become a weight-bearing structure. In more ancestral states the two sides of the girdle were not attached. In Acanthostega there in contact between the two dies and fusion of the girdle with the sacral rib of the vertebral column. These fusions would have made the pelvic region more powerful and equipped to counter the force of gravity when not supported by the buoyancy of and aquatic environment.

Therefore, paleontologists surmise that it probably lived in shallow, weed-choked swamps, the legs having evolved for some other purpose than walking on land. Jennifer A. Clack
Jennifer A. Clack
Jennifer Alice Clack, FRS, is an English paleontologist, an expert in the field of evolutionary biology. She studies the "fish to tetrapod" transition— the origin, evolutionary development and radiation of early tetrapods and their relatives among the lobe-finned fishes...
interprets this as showing that this was primarily an aquatic creature descended from fish that had never left the sea, and that tetrapods had evolved features which later proved useful for terrestrial life, rather than crawling onto land and then gaining legs and feet as had previously been surmised. At that period, for the first time, deciduous
Deciduous
Deciduous means "falling off at maturity" or "tending to fall off", and is typically used in reference to trees or shrubs that lose their leaves seasonally, and to the shedding of other plant structures such as petals after flowering or fruit when ripe...
plants were flourishing and annually shedding leaves into the water, attracting small prey into warm oxygen-poor shallows that were difficult for larger fish to swim in. Clack remarks on how the lower jaw of Acanthostega shows a change from the jaws of fish which have two rows of teeth, with a large number of small teeth in the outer row, and two large fangs and some small teeth in the inner row. It differs, having a small number of larger teeth in the outer row and smaller teeth in the inner row, and she suggests that this change probably went with a shift in early tetrapods from feeding exclusively in water to feeding with the head above water or on land.

Research based on analysis of the suture morphology in its skull indicates that the species may have bitten directly on prey at or near the water's edge. Markey and Marshall compared the skull with the skulls of fish, which use suction feeding as the primary method of prey capture, and creatures known to have used the direct biting on prey typical of terrestrial animals. Their results indicate that Acanthostega was adapted for what they call terrestrial-style feeding, strongly supporting the hypothesis that the terrestrial mode of feeding first emerged in aquatic animals. If correct, this shows an animal specialized for hunting and living in shallow waters in the line between land and water. Newer research also indicates that it is possible Acanthostega actually evolved from an ancestor that was more terrestrial adapted than itself.

The fossilized remains are generally well preserved, with the famous fossil
Fossil
Fossils are the preserved remains or traces of animals , plants, and other organisms from the remote past...
by which the significance of this species was discovered being found by Jennifer A. Clack
Jennifer A. Clack
Jennifer Alice Clack, FRS, is an English paleontologist, an expert in the field of evolutionary biology. She studies the "fish to tetrapod" transition— the origin, evolutionary development and radiation of early tetrapods and their relatives among the lobe-finned fishes...
in East Greenland
Greenland
Greenland is an autonomous country within the Kingdom of Denmark, located between the Arctic and Atlantic Oceans, east of the Canadian Arctic Archipelago. Though physiographically a part of the continent of North America, Greenland has been politically and culturally associated with Europe for...
in 1987, though fragments of the skull had been discovered in 1933 by Gunnar Säve-Söderbergh
Gunnar Säve-Söderbergh
Gunnar Säve-Söderbergh was a Swedish palaeontologist and geologist. Säve-Söderbergh was born at Falun, the son of the neurologist Gotthard Söderbergh and Inga Säve. He passed his G.C.E. at Gothenburg in 1928 and took bachelor's and licentiate's degrees at Uppsala University in 1931 and 1933,...
and Erik Jarvik
Erik Jarvik
Anders Erik Vilhelm Jarvik was a Swedish palaeozoologist who worked extensively on the sarcopterygian fish Eusthenopteron...
. 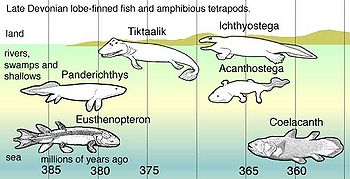 Acanthostega is seen as part of widespread speciation in the late Devonian period, starting with purely aquatic lobe-finned fish, with their successors showing increased air-breathing capability and related adaptions to the jaws and gills, as well as more muscular neck allowing freer movement of the head than fish have, and use of the fins to raise the body of the fish. These features are displayed by the earlier Tiktaalik
Tiktaalik
Tiktaalik is a genus of extinct sarcopterygian from the late Devonian period, with many features akin to those of tetrapods . It is an example from several lines of ancient sarcopterygian "fish" developing adaptations to the oxygen-poor shallow-water habitats of its time, which led to the...
, which like the Ichthyostega
Ichthyostega
Ichthyostega is an early tetrapod genus that lived at the end of the Upper Devonian period . It was a labyrinthodont, one of the first fossil record of tetrapods. Ichthyostega possessed lungs and limbs that helped it navigate through shallow water in swamps...
living around the same time as Acanthostega showed signs of greater abilities to move around on land, but is thought to have been primarily aquatic.