Encyclopedia
Acanthodii is a class of extinct fish
Fish
Fish are a paraphyletic group of organisms that consist of all gill-bearing aquatic vertebrate animals that lack limbs with digits. Included in this definition are the living hagfish, lampreys, and cartilaginous and bony fish, as well as various extinct related groups...
es, sharing features with both bony fish  and cartilaginous fish. In form they resembled shark
Shark
Sharks are a type of fish with a full cartilaginous skeleton and a highly streamlined body. The earliest known sharks date from more than 420 million years ago....
s, but their epidermis was covered with tiny rhomboid platelets like the scales of holosteans (gar
Gar
In American English the name gar is strictly applied to members of the Lepisosteidae, a family including seven living species of fish in two genera that inhabit fresh, brackish, and occasionally marine, waters of eastern North America, Central America, and the Caribbean islands.-Etymology:In...
s, bowfin
Bowfin
The Bowfin, Amia calva, is the last surviving member of the order Amiiformes , and of the family Amiidae...
s). They may have been an independent phylogenetic branch of fishes, which had evolved from little-specialized forms close to Recent Chondrichthyes
Chondrichthyes
Chondrichthyes or cartilaginous fishes are jawed fish with paired fins, paired nares, scales, two-chambered hearts, and skeletons made of cartilage rather than bone...
.

Acanthodians did, in fact, have a cartilaginous skeleton
Skeleton
The skeleton is the body part that forms the supporting structure of an organism. There are two different skeletal types: the exoskeleton, which is the stable outer shell of an organism, and the endoskeleton, which forms the support structure inside the body.In a figurative sense, skeleton can...
, but their fins had a wide, bony base and were reinforced on their anterior margin with a dentine spine.

The earliest acanthodians were marine, but during the Devonian
Devonian
The Devonian is a geologic period and system of the Paleozoic Era spanning from the end of the Silurian Period, about 416.0 ± 2.8 Mya , to the beginning of the Carboniferous Period, about 359.2 ± 2.5 Mya...
, freshwater species became predominant. They are distinguished in two respects: they were the earliest known jawed vertebrate
Vertebrate
Vertebrates are animals that are members of the subphylum Vertebrata . Vertebrates are the largest group of chordates, with currently about 58,000 species described. Vertebrates include the jawless fishes, bony fishes, sharks and rays, amphibians, reptiles, mammals, and birds...
s, and they had stout spines
Spine (zoology)
A spine is a hard, thorny or needle-like structure which occurs on various animals. Animals such as porcupines and sea urchins grow spines as a self-defense mechanism. Spines are often formed of keratin...
supporting their fin
Fin
A fin is a surface used for stability and/or to produce lift and thrust or to steer while traveling in water, air, or other fluid media, . The first use of the word was for the limbs of fish, but has been extended to include other animal limbs and man-made devices...
s, fixed in place and non-movable (like a shark
Shark
Sharks are a type of fish with a full cartilaginous skeleton and a highly streamlined body. The earliest known sharks date from more than 420 million years ago....
's dorsal fin
Dorsal fin
A dorsal fin is a fin located on the backs of various unrelated marine and freshwater vertebrates, including most fishes, marine mammals , and the ichthyosaurs...
). 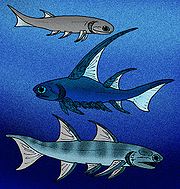 There were three orders: Climatiiformes, Ischnacanthiformes and Acanthodiformes. Climatiiforma had shoulder armor and many small sharp spines, Ischnacanthiforma with teeth fused to the jaw, and the Acanthodiforma were filter feeder
Filter feeder
Filter feeders are animals that feed by straining suspended matter and food particles from water, typically by passing the water over a specialized filtering structure. Some animals that use this method of feeding are clams, krill, sponges, baleen whales, and many fish and some sharks. Some birds,...
s, with no teeth in the jaw, but long gill
Gill
A gill is a respiratory organ found in many aquatic organisms that extracts dissolved oxygen from water, afterward excreting carbon dioxide. The gills of some species such as hermit crabs have adapted to allow respiration on land provided they are kept moist...
rakers. Overall, the acanthodians' jaws are presumed to have evolved from the first gill arch of some ancestral jawless fishes that had a gill skeleton made of pieces of jointed cartilage.

The popular name "spiny sharks" is really a misnomer for these early jawed fishes. The name was coined because they were superficially shark-shaped, with a streamlined body, paired fins, and a strongly upturned tail; stout bony spines supported all the fins except the tail - hence, "spiny sharks". Fossilized spines and scales
Ichthyolith
An ichthyolith is any disarticulated remains of a fish found in the fossil record, most often a scale, denticle or tooth....
are often all that remains of these fishes in ancient sedimentary rock
Sedimentary rock
Sedimentary rock are types of rock that are formed by the deposition of material at the Earth's surface and within bodies of water. Sedimentation is the collective name for processes that cause mineral and/or organic particles to settle and accumulate or minerals to precipitate from a solution....
s.

The scale
Scale (zoology)
In most biological nomenclature, a scale is a small rigid plate that grows out of an animal's skin to provide protection. In lepidopteran species, scales are plates on the surface of the insect wing, and provide coloration...
s of Acanthodii have distinctive ornamentation peculiar to each order. Because of this, the scales are often used in determining relative age of sedimentary rock. The scales are tiny, with a bulbous base, a neck, and a flat or slightly curved diamond-shaped crown.

Many paleonthologists consider that the acanthodians were close to the ancestors of the bony fishes. Although their interior skeleton
Skeleton
The skeleton is the body part that forms the supporting structure of an organism. There are two different skeletal types: the exoskeleton, which is the stable outer shell of an organism, and the endoskeleton, which forms the support structure inside the body.In a figurative sense, skeleton can...
s were made of cartilage
Cartilage
Cartilage is a flexible connective tissue found in many areas in the bodies of humans and other animals, including the joints between bones, the rib cage, the ear, the nose, the elbow, the knee, the ankle, the bronchial tubes and the intervertebral discs...
, a bonelike material had developed in the skins of these fishes, in the form of closely fitting scales (see above). Some scales were greatly enlarged and formed a bony covering on top of the head and over the lower shoulder girdle. Others developed a bony flap over the gill openings analogous to the operculum
Operculum (fish)
The operculum of a bony fish is the hard bony flap covering and protecting the gills. In most fish, the rear edge of the operculum roughly marks the division between the head and the body....
in later bony fishes.

Subphylum Vertebrata
└─Infraphylum Gnathostomata
├─Class Placodermi
Placodermi
Placodermi is a class of armoured prehistoric fish, known from fossils, which lived from the late Silurian to the end of the Devonian Period. Their head and thorax were covered by articulated armoured plates and the rest of the body was scaled or naked, depending on the species. Placoderms were...
— extinct (armored gnathostomes)
└Microphylum Eugnathostomata
Eugnathostomata
-Taxonomy and phylogeny: Subphylum Vertebrata └─Infraphylum Gnathostomata ├─Class Placodermi — extinct └Microphylum Eugnathostomata...
(true jawed vertebrates)
├─Class Chondrichthyes
Chondrichthyes
Chondrichthyes or cartilaginous fishes are jawed fish with paired fins, paired nares, scales, two-chambered hearts, and skeletons made of cartilage rather than bone...
(cartilaginous fish)
└─(unranked) Teleostomi
Teleostomi
Teleostomi is a clade of jawed vertebrates that includes the tetrapods, bony fish, and the wholly extinct acanthodian fish. Key characters of this group include an operculum and a single pair of respiratory openings, features which were lost or modified in some later representatives...
(Acanthodii & Osteichthyes)
├─Class Acanthodii — extinct ("spiny sharks")
└Superclass Osteichthyes
Osteichthyes
Osteichthyes , also called bony fish, are a taxonomic group of fish that have bony, as opposed to cartilaginous, skeletons. The vast majority of fish are osteichthyes, which is an extremely diverse and abundant group consisting of over 29,000 species...
(bony fish)
├─Class Actinopterygii
Actinopterygii
The Actinopterygii or ray-finned fishes constitute a class or sub-class of the bony fishes.The ray-finned fishes are so called because they possess lepidotrichia or "fin rays", their fins being webs of skin supported by bony or horny spines , as opposed to the fleshy, lobed fins that characterize...
(ray-finned fish)
└─Class Sarcopterygii
Sarcopterygii
The Sarcopterygii or lobe-finned fishes – sometimes considered synonymous with Crossopterygii constitute a clade of the bony fishes, though a strict classification would include the terrestrial vertebrates...
(lobe-finned fish)
└Superclass Tetrapoda
├─Class Amphibia (amphibians)
└(unranked) Amniota (amniotic egg)
├─Class Sauropsida
Reptile
Reptiles are members of a class of air-breathing, ectothermic vertebrates which are characterized by laying shelled eggs , and having skin covered in scales and/or scutes. They are tetrapods, either having four limbs or being descended from four-limbed ancestors...
(reptiles or sauropsids)
│ └─Class Aves
Bird
Birds are feathered, winged, bipedal, endothermic , egg-laying, vertebrate animals. Around 10,000 living species and 188 families makes them the most speciose class of tetrapod vertebrates. They inhabit ecosystems across the globe, from the Arctic to the Antarctic. Extant birds range in size from...
(birds)
└─Class Synapsida
└─Class Mammal
Mammal
Mammals are members of a class of air-breathing vertebrate animals characterised by the possession of endothermy, hair, three middle ear bones, and mammary glands functional in mothers with young...
ia (mammals)