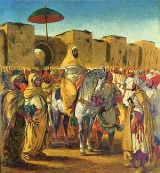 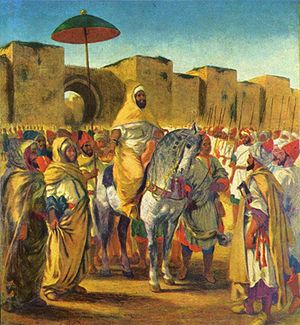 Moulay Sharif
Sharif
Sharīf or Chérif is a traditional Arab tribal title given to those who serve as the protector of the tribe and all tribal assets, such as property, wells, and land. In origin, the word is an adjective meaning "noble", "highborn". The feminine singular is sharifa...
Abderrahmane (Abd-er-Rahman) (1778–1859) was sultan
Sultan
Sultan is a title with several historical meanings. Originally, it was an Arabic language abstract noun meaning "strength", "authority", "rulership", and "dictatorship", derived from the masdar سلطة , meaning "authority" or "power". Later, it came to be used as the title of certain rulers who...
of Morocco
Morocco
Morocco , officially the Kingdom of Morocco , is a country located in North Africa. It has a population of more than 32 million and an area of 710,850 km², and also primarily administers the disputed region of the Western Sahara...
from 1822 to 1859. He was a member of the Alaouite dynasty
Alaouite Dynasty
The Alaouite Dynasty is the name of the current Moroccan royal family. The name Alaouite comes from the ‘Alī of its founder Moulay Ali Cherif who became Prince of Tafilalt in 1631. His son Mulay r-Rshid was able to unite and pacify the country...
.

He was born in 1778. His reign began at the start of the French
France
The French Republic , The French Republic , The French Republic , (commonly known as France , is a unitary semi-presidential republic in Western Europe with several overseas territories and islands located on other continents and in the Indian, Pacific, and Atlantic oceans. Metropolitan France...
occupation of Algeria
Algeria
Algeria , officially the People's Democratic Republic of Algeria , also formally referred to as the Democratic and Popular Republic of Algeria, is a country in the Maghreb region of Northwest Africa with Algiers as its capital.In terms of land area, it is the largest country in Africa and the Arab...
. Morocco supported the Algerian resistance movement
Resistance movement
A resistance movement is a group or collection of individual groups, dedicated to opposing an invader in an occupied country or the government of a sovereign state. It may seek to achieve its objects through either the use of nonviolent resistance or the use of armed force...
led by the Algerian Emir Abd al-Qādir al-Jazā'irī during this period.

In 1856, Moulay Abderrahmane established the souk
Souk
A souq is a commercial quarter in an Arab, Berber, and increasingly European city. The term is often used to designate the market in any Arabized or Muslim city, but in modern times it appears in Western cities too...
of Zraqten on the north side of the High Atlas
Atlas Mountains
The Atlas Mountains is a mountain range across a northern stretch of Africa extending about through Morocco, Algeria, and Tunisia. The highest peak is Toubkal, with an elevation of in southwestern Morocco. The Atlas ranges separate the Mediterranean and Atlantic coastlines from the Sahara Desert...
, adding to territory in southern Morocco controlled by the Glaouis, who were caid
CAID
Caid may refer to:* Caid , a type of governorship found in North Africa and Moorish Spain* Caid , a form of football popular in Ireland until the mid-19th century...
s ruling various southern areas from the 18th century until Moroccan independence
Independence
Independence is a condition of a nation, country, or state in which its residents and population, or some portion thereof, exercise self-government, and usually sovereignty, over its territory....
in 1956, after originally settling in Telouet
Telouet
Telouet is a Kasbah along the former route of the caravans from the Sahara over the Atlas Mountains to Marrakech. It lies at an elevation of and was the seat of the El Glaoui family's power. The palace can still be visited but it is steadily becoming more damaged and is slowly collapsing...
to establish a souk. They would tax caravans travelling from the Sahara
Sahara
The Sahara is the world's second largest desert, after Antarctica. At over , it covers most of Northern Africa, making it almost as large as Europe or the United States. The Sahara stretches from the Red Sea, including parts of the Mediterranean coasts, to the outskirts of the Atlantic Ocean...
and Tafilalt
Tafilalt
Tafilalt or Tafilet is a region and the most important oasis of the Moroccan Sahara; it is also considered one of the largest oases in the world, the oasis is entirely located along the Ziz River. The oasis is ten days' journey south of Fez, across the Atlas Mountains...
regions as well as taxing goods sold locally.

The Agdal Gardens
Agdal Gardens
The Agdal Gardens are gardens, of about of surface, to the south of Dar El Makhzen, the Royal Palace, and the medina in Marrakech, Morocco. Their name derives from the Berber language for "walled meadow"...
of Marrakesh, an irrigated
Irrigation
Irrigation may be defined as the science of artificial application of water to the land or soil. It is used to assist in the growing of agricultural crops, maintenance of landscapes, and revegetation of disturbed soils in dry areas and during periods of inadequate rainfall...
garden
Garden
A garden is a planned space, usually outdoors, set aside for the display, cultivation, and enjoyment of plants and other forms of nature. The garden can incorporate both natural and man-made materials. The most common form today is known as a residential garden, but the term garden has...
, originally established by the Almoravids
Almoravids
The Almoravids were a Berber dynasty of Morocco, who formed an empire in the 11th-century that stretched over the western Maghreb and Al-Andalus. Their capital was Marrakesh, a city which they founded in 1062 C.E...
in the 12th century and enlarged in the days of the Saadians was revamped and encircled by ramparts
Defensive wall
A defensive wall is a fortification used to protect a city or settlement from potential aggressors. In ancient to modern times, they were used to enclose settlements...
during the reign of Moulay Abderrahmane.