ABC Notation being ASCII-based, any text editor can be used to edit the music. Even so, there are now many ABC Notation software packages available that offer a wide variety of features, including the ability to read and process abc notation, including into midi files and as standard 'dotted' notation. Such software is readily available for most computer systems including Microsoft Windows
Microsoft Windows
Microsoft Windows is a series of operating systems produced by Microsoft.Microsoft introduced an operating environment named Windows on November 20, 1985 as an add-on to MS-DOS in response to the growing interest in graphical user interfaces . Microsoft Windows came to dominate the world's personal...
, Unix
Unix
Unix is a multitasking, multi-user computer operating system originally developed in 1969 by a group of AT&T employees at Bell Labs, including Ken Thompson, Dennis Ritchie, Brian Kernighan, Douglas McIlroy, and Joe Ossanna...
/Linux
Linux
Linux is a Unix-like computer operating system assembled under the model of free and open source software development and distribution. The defining component of any Linux system is the Linux kernel, an operating system kernel first released October 5, 1991 by Linus Torvalds...
, Macintosh
Macintosh
The Macintosh , or Mac, is a series of several lines of personal computers designed, developed, and marketed by Apple Inc. The first Macintosh was introduced by Apple's then-chairman Steve Jobs on January 24, 1984; it was the first commercially successful personal computer to feature a mouse and a...
, PalmOS, and web-based.

In the 1980s Chris Walshaw began writing out fragments of folk/traditional tunes using letters to represent the notes before he learned standard Western music notation. Later he began using MusicTeX to notate French bagpipe music. To reduce the tedium of writing the MusicTeX code, he wrote a front-end for generating the TeX
TeX
TeX is a typesetting system designed and mostly written by Donald Knuth and released in 1978. Within the typesetting system, its name is formatted as ....
commands, which by 1993 evolved into the abc2mtex program. For more details see Chris' short history of abc, and John Chambers' chronology of ABC notation and software.

The closest thing to an official standard is the (officially labelled "draft") "ABC Music standard 2.0".. It is a textual description of abc syntax and was grown from the 1996 user guide of version 1.6 of Chris Walshaw's original abc2mtex program. In 1997, Henrik Norbeck published a BNF
Backus–Naur form
In computer science, BNF is a notation technique for context-free grammars, often used to describe the syntax of languages used in computing, such as computer programming languages, document formats, instruction sets and communication protocols.It is applied wherever exact descriptions of...
description of the abc v1.6 standard.

In 1997, Steve Allen registered the text/vnd.abc MIME
MIME
Multipurpose Internet Mail Extensions is an Internet standard that extends the format of email to support:* Text in character sets other than ASCII* Non-text attachments* Message bodies with multiple parts...
media type with the IANA
Internet Assigned Numbers Authority
The Internet Assigned Numbers Authority is the entity that oversees global IP address allocation, autonomous system number allocation, root zone management in the Domain Name System , media types, and other Internet Protocol-related symbols and numbers...
. But registration as a top level MIME type would require a full-blown RFC
Request for Comments
In computer network engineering, a Request for Comments is a memorandum published by the Internet Engineering Task Force describing methods, behaviors, research, or innovations applicable to the working of the Internet and Internet-connected systems.Through the Internet Society, engineers and...
. In 2006 Phil Taylor reported that quite a few websites still serve abc files as text/plain.

In 1999, Chris Walshaw started work on a new version of the abc specification to standardize the extensions that had been developed in various 3rd-party tools. After much discussion on the ABC users mailing list, a draft standard - version 1.7.6] was eventually produced in August 2000, but was never officially released. At that point Chris stepped away for several years from actively developing abc.

After a surge of renewed interest in clarifying some ambiguities in the 2.0 draft and suggestions for new features, serious discussion of a new (and official) standard resumed in 2011 and is currently (July 2011) ongoing on the abcusers mailing list. Chris Walshaw has gotten involved again and is coordinating this effort. The changes currently being discussed are reflected at http://abcnotation.com/wiki/abc:standard:v2.1

The following is an example of the use of abc notation

Lines in the first part of the tune notation, beginning with a letter followed by a colon, indicate various aspects of the tune such as the index, when there are more than one tune in a file (X:), the title (T:), the time signature (M:), the default note length (L:), the type of tune (R:) and the key (K:). Lines following the key designation represent the tune. This example can be translated into traditional music notation using one of the abc conversion tools. For example, abcm2ps software produces output that looks like the following image: 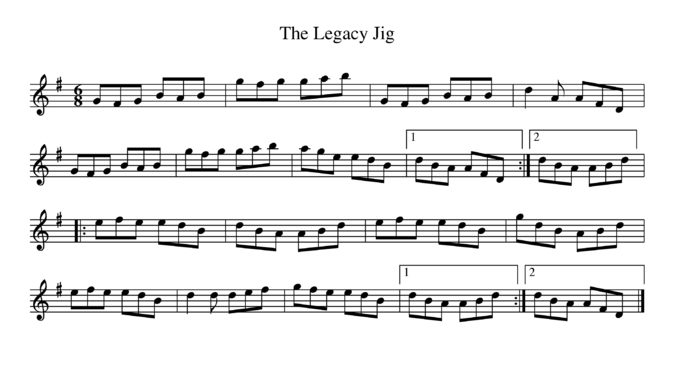 Recently abc has been implemented as a means of composing and editing music collections in collaborative environments. Several examples of Wiki environments that have been adapted to use abc are: