A History of the English-Speaking Peoples
Topic Home
Discussion
0 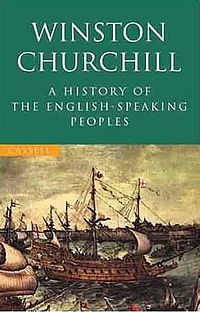 A History of the English-Speaking Peoples is a four-volume history
History
History is the discovery, collection, organization, and presentation of information about past events. History can also mean the period of time after writing was invented. Scholars who write about history are called historians...
of Britain
United Kingdom
The United Kingdom of Great Britain and Northern IrelandIn the United Kingdom and Dependencies, other languages have been officially recognised as legitimate autochthonous languages under the European Charter for Regional or Minority Languages...
and its former colonies and possessions throughout the world, written by Winston Churchill
Winston Churchill
Sir Winston Leonard Spencer-Churchill, was a predominantly Conservative British politician and statesman known for his leadership of the United Kingdom during the Second World War. He is widely regarded as one of the greatest wartime leaders of the century and served as Prime Minister twice...
, covering the period from Caesar's invasions of Britain
Caesar's invasions of Britain
In his Gallic Wars, Julius Caesar invaded Britain twice, in 55 and 54 BC. The first invasion, made late in summer, was either intended as a full invasion or a reconnaissance-in-force expedition...
(55 BC
55 BC
Year 55 BC was a year of the pre-Julian Roman calendar. At the time, it was known as the Year of the Consulship of Crassus and Pompey...
) to the beginning of the First World War
World War I
World War I , which was predominantly called the World War or the Great War from its occurrence until 1939, and the First World War or World War I thereafter, was a major war centred in Europe that began on 28 July 1914 and lasted until 11 November 1918...
(1914). It was started in 1937 and finally published 1956–58, delayed several times by war and his work on other texts. The volumes have been abridged into a single-volume, concise edition.

Churchill, who excelled in history as a child and was himself half-American on his maternal side, had a firm belief in a so-called "special relationship
Special relationship
The Special Relationship is a phrase used to describe the exceptionally close political, diplomatic, cultural, economic, military and historical relations between the United Kingdom and the United States, following its use in a 1946 speech by British statesman Winston Churchill...
" between the people of Britain with the Commonwealth of Nations
Commonwealth of Nations
The Commonwealth of Nations, normally referred to as the Commonwealth and formerly known as the British Commonwealth, is an intergovernmental organisation of fifty-four independent member states...
united under the Crown (New Zealand
New Zealand
New Zealand is an island country in the south-western Pacific Ocean comprising two main landmasses and numerous smaller islands. The country is situated some east of Australia across the Tasman Sea, and roughly south of the Pacific island nations of New Caledonia, Fiji, and Tonga...
, Canada
Canada
Canada is a North American country consisting of ten provinces and three territories. Located in the northern part of the continent, it extends from the Atlantic Ocean in the east to the Pacific Ocean in the west, and northward into the Arctic Ocean...
, Australia
Australia
Australia , officially the Commonwealth of Australia, is a country in the Southern Hemisphere comprising the mainland of the Australian continent, the island of Tasmania, and numerous smaller islands in the Indian and Pacific Oceans. It is the world's sixth-largest country by total area...
, South Africa
South Africa
The Republic of South Africa is a country in southern Africa. Located at the southern tip of Africa, it is divided into nine provinces, with of coastline on the Atlantic and Indian oceans...
etc.) and the people of the United States
United States
The United States of America is a federal constitutional republic comprising fifty states and a federal district...
who had broken with the Crown and gone their own way. His book thus dealt with the resulting two divisions of the "English-speaking peoples".

At the suggestion of publisher Newman Flower
Newman Flower
Sir Walter Newman Flower was an English publisher and author. He transformed the fortunes of the publishing house Cassell & Co, and later became its proprietor. As an author, he published studies of the composers George Frideric Handel, Franz Schubert and Arthur Sullivan...
, Churchill began the history during the 1930s, during the period that his official biographer Martin Gilbert
Martin Gilbert
Sir Martin John Gilbert, CBE, PC is a British historian and Fellow of Merton College, University of Oxford. He is the author of over eighty books, including works on the Holocaust and Jewish history...
termed the "wilderness years" when he was not in government. Work was interrupted in 1939 when the Second World War
World War II
World War II, or the Second World War , was a global conflict lasting from 1939 to 1945, involving most of the world's nations—including all of the great powers—eventually forming two opposing military alliances: the Allies and the Axis...
broke out and then when Churchill was appointed Prime Minister
Prime Minister of the United Kingdom
The Prime Minister of the United Kingdom of Great Britain and Northern Ireland is the Head of Her Majesty's Government in the United Kingdom. The Prime Minister and Cabinet are collectively accountable for their policies and actions to the Sovereign, to Parliament, to their political party and...
. After the war finished in 1945, Churchill was busy, first writing his history of that conflict and then as Prime Minister again between 1951 and 1955, and so it was not until the late 1950s, when Churchill was in his early eighties, that he was able to finish the work.

The later volumes were completed when Churchill was over eighty. A full one-third of the last volume was devoted to the military minutiae of the American Civil War
American Civil War
The American Civil War was a civil war fought in the United States of America. In response to the election of Abraham Lincoln as President of the United States, 11 southern slave states declared their secession from the United States and formed the Confederate States of America ; the other 25...
. Social history
Social history
Social history, often called the new social history, is a branch of History that includes history of ordinary people and their strategies of coping with life. In its "golden age" it was a major growth field in the 1960s and 1970s among scholars, and still is well represented in history departments...
, the agricultural revolution
British Agricultural Revolution
British Agricultural Revolution describes a period of development in Britain between the 17th century and the end of the 19th century, which saw an epoch-making increase in agricultural productivity and net output. This in turn supported unprecedented population growth, freeing up a significant...
, and the industrial revolution
Industrial Revolution
The Industrial Revolution was a period from the 18th to the 19th century where major changes in agriculture, manufacturing, mining, transportation, and technology had a profound effect on the social, economic and cultural conditions of the times...
hardly get a mention. Political opponent Clement Attlee
Clement Attlee
Clement Richard Attlee, 1st Earl Attlee, KG, OM, CH, PC, FRS was a British Labour politician who served as the Prime Minister of the United Kingdom from 1945 to 1951, and as the Leader of the Labour Party from 1935 to 1955...
suggested the work should have been titled "Things in history that interested me."

Despite these criticisms, the books were bestsellers and reviewed favourably on both sides of the Atlantic. In the Daily Telegraph, J.H. Plumb wrote: "This history will endure; not only because Sir Winston has written it, but also because of its own inherent virtues — its narrative power, its fine judgment of war and politics, of soldiers and statesmen, and even more because it reflects a tradition of what Englishmen in the hey-day of their empire thought and felt about their country's past." The work was one of Churchill's writings mentioned in his Nobel Prize in literature
Nobel Prize in Literature
Since 1901, the Nobel Prize in Literature has been awarded annually to an author from any country who has, in the words from the will of Alfred Nobel, produced "in the field of literature the most outstanding work in an ideal direction"...
citation.

The four volumes are:


In the early 1970s, the BBC
BBC
The British Broadcasting Corporation is a British public service broadcaster. Its headquarters is at Broadcasting House in the City of Westminster, London. It is the largest broadcaster in the world, with about 23,000 staff...
produced a series of twenty-six fifty-minute plays loosely based around Churchill's work and entitled Churchill's People
Churchill's People
Churchill's People is series of 26 historical dramas produced by the BBC, based on Winston Churchill's A History of the English-Speaking Peoples. They were first broadcast on BBC1 in 1974 and 1975....
. However, the quality of the productions was judged to be poor and the series received low ratings (see BBC television drama
BBC television drama
BBC television dramas have been produced and broadcast since even before the public service company had an officially established television broadcasting network in the United Kingdom...
). Also in the early 1970s, the work was published in magazine format in 112 weekly issues with articles by other historians in the United Kingdom, Canada, Australia, New Zealand, and South Africa.

A sequel to Churchill's work, A History of the English-Speaking Peoples Since 1900, by Andrew Roberts, was published in 2006.