Encyclopedia
The AWD-Arena is a football stadium
Stadium
A modern stadium is a place or venue for outdoor sports, concerts, or other events and consists of a field or stage either partly or completely surrounded by a structure designed to allow spectators to stand or sit and view the event.)Pausanias noted that for about half a century the only event...
in the district Calenberger Neustadt in Hanover
Hanover
Hanover or Hannover, on the river Leine, is the capital of the federal state of Lower Saxony , Germany and was once by personal union the family seat of the Hanoverian Kings of Great Britain, under their title as the dukes of Brunswick-Lüneburg...
, Lower Saxony
Lower Saxony
Lower Saxony is a German state situated in north-western Germany and is second in area and fourth in population among the sixteen states of Germany...
, Germany
Germany
Germany , officially the Federal Republic of Germany , is a federal parliamentary republic in Europe. The country consists of 16 states while the capital and largest city is Berlin. Germany covers an area of 357,021 km2 and has a largely temperate seasonal climate...
, and competition venue of the German Bundesliga football club Hannover 96
Hannover 96
Hannoverscher Sportverein von 1896, commonly referred to as Hannover 96, Hannover or simply 96, is a German association football club based in the city of Hanover, Lower Saxony.-Foundation to WWII:...
.

The original 86,000-seat stadium was completed in 1954 and has since been rebuilt several times for various major football events. Today it has 49,000 covered seats. During the World Cup 2006 the stadium was named FIFA World Cup Stadium, Hanover.

In 2002, Hannover 96 leased the name right at the Lower Saxony Stadium for five years to the Financial Services AWD. In 2007 the contract was extended for another five years to June 2012.

The stadium was originally known as Niedersachsenstadion (Eng: Lower Saxony Stadium), built between 1952–1954, with an original capacity of 86,000. Huge amounts of debris from the houses in Hannover destroyed during World War II
World War II
World War II, or the Second World War , was a global conflict lasting from 1939 to 1945, involving most of the world's nations—including all of the great powers—eventually forming two opposing military alliances: the Allies and the Axis...
were used as the foundations of the stadium, with a total construction cost of 4 million Deutschmark. The stadium officially opened on September 26, 1954.

Since the performances of The Rolling Stones
The Rolling Stones
The Rolling Stones are an English rock band, formed in London in April 1962 by Brian Jones , Ian Stewart , Mick Jagger , and Keith Richards . Bassist Bill Wyman and drummer Charlie Watts completed the early line-up...
in 1981 & Queen
Queen (band)
Queen are a British rock band formed in London in 1971, originally consisting of Freddie Mercury , Brian May , John Deacon , and Roger Taylor...
in 1982, the stadium has developed into the leading open air concert venue in Northern Germany. Tina Turner
Tina Turner
Tina Turner is an American singer and actress whose career has spanned more than 50 years. She has won numerous awards and her achievements in the rock music genre have led many to call her the "Queen of Rock 'n' Roll".Turner started out her music career with husband Ike Turner as a member of the...
also played here a couple of times, 1990,1996 and 2000. After the stadium underwent extensive revelopment in 2003/04, the open air tradition was revived again with a concert again by The Rolling Stones in the new arena.

Since 2002, it has carried the name of sponsor AWD.

The stadium was one of the nine venues chosen for (West) Germany's first hosting of the World Cup
1974 FIFA World Cup
The 1974 FIFA World Cup, the tenth staging of the World Cup, was held in West Germany from 13 June to 7 July. The tournament marked the first time that the current trophy, the FIFA World Cup Trophy, created by the Italian sculptor Silvio Gazzaniga, was awarded...
. This event saw the number of seats increase to 38,000, which entailed a decrease in the overall capacity to 60,400. In addition, the upper rank of the west grandstand was completely roofed. These alterations cost 26million DM. Newly modified, the arena featured in both the first and second group phase.

The following games were played at the stadium during the World Cup of 1974:

When Germany hosted its second international tournament, the stadium was again chosen as a venue. By now, due to the conversion of 8,000 terrace spots into single seating, the capacity stood at 55,000. It hosted two group matches:

The following games were played at the stadium during the World Cup of 2006: 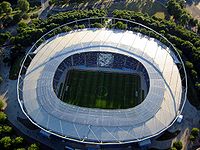 Although the stadium has seen many changes through the years, none were as extensive and impacting as the redevelopment of 2003/04 by Schulitz & Partner Architects, which cost 65 million euros.

There had been much controversy within the club's fanbase over suggestions of building a new football arena for many years before. Eventually this led to the decision to preserve and comprehensively redevelop the existing stadium in 1997/98. When Germany was somewhat unexpectedly awarded the hosting of the 2006 FIFA World Cup
2006 FIFA World Cup
The 2006 FIFA World Cup was the 18th FIFA World Cup, the quadrennial international football world championship tournament. It was held from 9 June to 9 July 2006 in Germany, which won the right to host the event in July 2000. Teams representing 198 national football associations from all six...
, the major stadium work was finally put into action.

During 2003/04, major parts of the stadium were rebuilt and thus the maximum capacity was reduced to 49,951 (of which around 8,000 are standing spaces). Before 2003, the stadium had had high floodlight masts (referred to by locals as 'toothbrushes'), track and field facilities inclusive and about 60% was open plan. The redevelopments transformed it completely into a football arena and removed approximately 70% of the previous building. The roof and about 25% of the area at the outer edges of the west grandstand were demolished like the north, south and east grandstand.

Instead of the previous scoreboards, the arena gained two modern video boards and replaced the old floodlight masts with 160 modern single headlights, which were integrated into the roof structure, supplying a light density of 1500 lux.

The pitch, under which a high performance drainage system and a cabin ground heating system was installed, was moved closer to the spectators than ever. With the removal of the track and field facilities, the pitch was moved directly to the west grandstand and the remaining grandstands were then built around it. This necessitated the stands behind the goals be designed in such a way that the upward gradient becomes larger gradually from west to east, creating a rather peculiar asymmetry, as the original west grandstand possessed such small angles of inclination and the new east grandstand was as constructed as steeply as possible.

The new inner roof was constructed using ETFE (ethylene tetrafluoroethylene) to allow sunlight through and thus allow the grass the grow naturally, whilst also protecting all spectators from bad weather http://archrecord.construction.com/projects/bts/archives/stadiums/06_AWD/overview.asp. This care for the pitch helps avoid the constant need to re-lay it as in many other roofed stadiums and was designed by Hanke Loköter who helped construction the Allianz Arena as well.

The new business and corporate packages of the AWD-Arena are just like the press area in the east grandstand. There are approximately 1,250 business seats, 29 VIP boxes for 10-12 people and 96 press places.

Work on the stadium finished ahead of schedule in December 2004. The first football match held following the redevelopment was on January 23, 2005, where Hannover 96
Hannover 96
Hannoverscher Sportverein von 1896, commonly referred to as Hannover 96, Hannover or simply 96, is a German association football club based in the city of Hanover, Lower Saxony.-Foundation to WWII:...
lost 0-3 to Bayer Leverkusen
Bayer Leverkusen
Bayer 04 Leverkusen is a German football club based in Leverkusen, North Rhine-Westphalia. It is the most well-known department of TSV Bayer 04 Leverkusen, a sports club whose members also participate in athletics, gymnastics, basketball and other sports.-Origins and early years:On 27 November...
in the Bundesliga.

In June 2008, it hosted the 2008 Hannover Sevens
2008 Hannover Sevens
The 2008 European Sevens Championship was a rugby sevens competition, with the final held in Hanover, Germany. It was the seventh edition of the European Sevens championship and also functioned as a qualifying tournament for the 2009 Rugby World Cup Sevens...
, the European Sevens championship in rugby union
Rugby union
Rugby union, often simply referred to as rugby, is a full contact team sport which originated in England in the early 19th century. One of the two codes of rugby football, it is based on running with the ball in hand...
.

On November 15, 2009, the stadium was filled to capacity as the funeral site for 32 year old Hannover 96 goalkeeper Robert Enke
Robert Enke
Robert Enke was a German football goalkeeper.Enke played at leading clubs in several European countries, namely Barcelona, Benfica and Fenerbahçe, but made the majority of his appearances for Bundesliga side Hannover 96 in his homeland.He won eight full international caps for the German national...
, who took his own life on November 10, 2009.

The stadium is one of few actual stadiums to be named on FIFA 12
FIFA 12
FIFA 12 is the nineteenth game in Electronic Arts' FIFA series of association football video games. It was developed by EA Canada, and published by Electronic Arts worldwide under the EA Sports label. David Rutter, the line producer for FIFA 12, promised "a revolutionary year for FIFA .....
when it was released of 28th Sept 2011