Encyclopedia
The A1 motorway is 236,1 km long, connecting Šentilj
Šentilj
Šentilj is a municipality in Slovenia. The seat of the municipality is the town of Šentilj v Slovenskih goricah . This town was an Austria-Slovenia border crossing checkpoint until December 21, 2007, when all immigration and customs checks ended after Slovenia joined the Schengen Area...
(at the Austria
Austria
Austria , officially the Republic of Austria , is a landlocked country of roughly 8.4 million people in Central Europe. It is bordered by the Czech Republic and Germany to the north, Slovakia and Hungary to the east, Slovenia and Italy to the south, and Switzerland and Liechtenstein to the...
n border) and Koper/Capodistria (on the shores of the Adriatic Sea
Adriatic Sea
The Adriatic Sea is a body of water separating the Italian Peninsula from the Balkan peninsula, and the system of the Apennine Mountains from that of the Dinaric Alps and adjacent ranges...
). It passes several important Slovenian cities, including Maribor
Maribor
Maribor is the second largest city in Slovenia with 157,947 inhabitants . Maribor is also the largest and the capital city of Slovenian region Lower Styria and the seat of the Municipality of Maribor....
, Celje
Celje
Celje is a typical Central European town and the third largest town in Slovenia. It is a regional center of Lower Styria and the administrative seat of the Urban Municipality of Celje . The town of Celje is located under Upper Celje Castle at the confluence of the Savinja, Ložnica, and Voglajna...
and Ljubljana
Ljubljana
Ljubljana is the capital of Slovenia and its largest city. It is the centre of the City Municipality of Ljubljana. It is located in the centre of the country in the Ljubljana Basin, and is a mid-sized city of some 270,000 inhabitants...
all the way to the Slovenian Littoral
Slovenian Littoral
The Slovenian Littoral is a historical region of Slovenia. Its name recalls the historical Habsburg crown land of the Austrian Littoral, of which the Slovenian Littoral was a part....
and Koper, with its important port
Port
A port is a location on a coast or shore containing one or more harbors where ships can dock and transfer people or cargo to or from land....
.

Construction began in 1970 and the first section was finished in 1972, connecting Vrhnika
Vrhnika
Vrhnika is a town and a municipality in Slovenia. It is situated on the Ljubljanica River, 21 km from Ljubljana along the A1 motorway.-History:...
and Postojna
Postojna
Postojna is a town and a municipality in the traditional region of Inner Carniola, from Trieste, in southwestern Slovenia. Population 14,581 .-History:...
. Everyday operation of this initial stretch started on 29 December 1972.

The connection to Koper was finished on 23 November 2004. The second-to-last part, from Trojane
Trojane
Trojane , is a settlement in the Municipality of Lukovica in central Slovenia. It lies on a hill near the border of two Slovene regions, Carniola and Styria. Until the freeway was finished in 2005, Trojane was on the main route from Ljubljana to Maribor.The Romans built a road on the route...
to Blagovica
Blagovica
Blagovica is a village in the Lukovica Municipality in the eastern part of the Upper Carniola region of Slovenia.Village Blagovica lies between rivers Radomlja and Zlatenščica and is the local center of the central-eastern part of the Črni graben Valley with an Elementary School, a Post Office, a...
, was opened on 12 August 2005. It was also the most expensive, having eight viaducts and two tunnels despite being only 11 km long. The final section, the eastern Maribor bypass, opened on 14 August 2009.

There are 8 interchanges
Interchange (road)
In the field of road transport, an interchange is a road junction that typically uses grade separation, and one or more ramps, to permit traffic on at least one highway to pass through the junction without directly crossing any other traffic stream. It differs from a standard intersection, at which...
on the motorway:

The motorway includes 10 tunnels and 2 galleries: 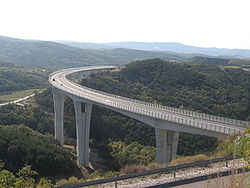 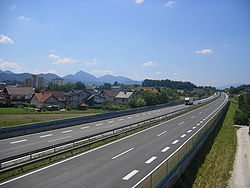 There are 49 viaduct
Viaduct
A viaduct is a bridge composed of several small spans. The term viaduct is derived from the Latin via for road and ducere to lead something. However, the Ancient Romans did not use that term per se; it is a modern derivation from an analogy with aqueduct. Like the Roman aqueducts, many early...
s, given in order from Šentilj to Koper:


The Črni Kal Viaduct
Crni Kal Viaduct
The Črni Kal Viaduct is the longest and highest viaduct in Slovenia. It is located on the A1 motorway above the Osp Valley near the village of Gabrovica, about 20 km east of Koper. Its name means "Black Dale" in Slovene, after the depression it crosses....
is the longest viaduct
Viaduct
A viaduct is a bridge composed of several small spans. The term viaduct is derived from the Latin via for road and ducere to lead something. However, the Ancient Romans did not use that term per se; it is a modern derivation from an analogy with aqueduct. Like the Roman aqueducts, many early...
in Slovenia
Slovenia
Slovenia , officially the Republic of Slovenia , is a country in Central and Southeastern Europe touching the Alps and bordering the Mediterranean. Slovenia borders Italy to the west, Croatia to the south and east, Hungary to the northeast, and Austria to the north, and also has a small portion of...
.
The source of this article is wikipedia, the free encyclopedia.  The text of this article is licensed under the GFDL.