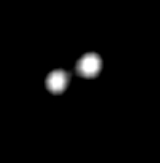 Encyclopedia
The most remarkable feature of Antiope is that it consists of two components of almost equal size (the difference in mass is less than 2.5%), making it a truly "double" asteroid
Binary asteroid
A binary asteroid is a system of two asteroids orbiting their common center of mass, in analogy with binary stars. 243 Ida was the first binary asteroid to be identified when the Galileo spacecraft did a flyby in 1993...
. Its binary nature was discovered on 10 August 2000 by a group of astronomers using adaptive optics
Adaptive optics
Adaptive optics is a technology used to improve the performance of optical systems by reducing the effect of wavefront distortions. It is used in astronomical telescopes and laser communication systems to remove the effects of atmospheric distortion, and in retinal imaging systems to reduce the...
at the Keck Telescope on Mauna Kea
Mauna Kea
Mauna Kea is a volcano on the island of Hawaii. Standing above sea level, its peak is the highest point in the state of Hawaii. However, much of the mountain is under water; when measured from its oceanic base, Mauna Kea is over tall—significantly taller than Mount Everest...
. The "secondary" is designated S/2000 (90) 1. Before this, IRAS
IRAS
The Infrared Astronomical Satellite was the first-ever space-based observatory to perform a survey of the entire sky at infrared wavelengths....
observations had suggested that the asteroid was 120 km in diameter.

Each component is about 86±1 km across, with their centers separated by only about 171 kilometers. This means that the gap separating the two halves is about the same as the diameter of each component. The two bodies orbit around the common center of mass
Center of mass
In physics, the center of mass or barycenter of a system is the average location of all of its mass. In the case of a rigid body, the position of the center of mass is fixed in relation to the body...
which lies in the space between them. The orbital period is approximately 16.50 hours, the eccentricity below 0.006. Every several years, a period of mutual occultations occurs when the asteroid is viewed from Earth. Using Kepler
Johannes Kepler
Johannes Kepler was a German mathematician, astronomer and astrologer. A key figure in the 17th century scientific revolution, he is best known for his eponymous laws of planetary motion, codified by later astronomers, based on his works Astronomia nova, Harmonices Mundi, and Epitome of Copernican...
's third law, the mass and density of the components can be derived from the orbital period and component sizes.

The complementary observations using adaptive optic observations on 8-10m class telescopes and mutual events photometric lightcurve over several months have served as input quantities for a derivation of a whole set of other physical parameters (shapes of the components, surface scattering, bulk density, and internal properties). The shape model is consistent with slightly non-spherical components, having a size ratio of 0.95 (with an average radius of 42.9 km), and exhibiting equilibrium figures for homogeneous rotating bodies. A comparison with grazing occultation event lightcurves taken in 2003 suggests that the real shape of the components do not depart much from Roche equilibrium
Roche limit
The Roche limit , sometimes referred to as the Roche radius, is the distance within which a celestial body, held together only by its own gravity, will disintegrate due to a second celestial body's tidal forces exceeding the first body's gravitational self-attraction...
figures (by more than 10%).