Astraea was the fifth asteroid
Asteroid
Asteroids are a class of small Solar System bodies in orbit around the Sun. They have also been called planetoids, especially the larger ones...
discovered, on December 8, 1845, by K. L. Hencke
Karl Ludwig Hencke
Karl Ludwig Hencke was a German amateur astronomer. He is sometimes confused with Johann Franz Encke, another German astronomer....
and named for Astraea, a goddess of justice named after the stars. It was his first of two asteroid discoveries. The second was 6 Hebe
6 Hebe
6 Hebe is a large main-belt asteroid, containing around half a percent of the mass of the belt. Its apparently high bulk density , however, means that by volume it does not rank among the top twenty asteroids...
. An amateur astronomer and post office employee, Hencke was looking for 4 Vesta
4 Vesta
Vesta, formally designated 4 Vesta, is one of the largest asteroids, with a mean diameter of about . It was discovered by Heinrich Wilhelm Olbers on March 29, 1807, and is named after the Roman virgin goddess of home and hearth, Vesta....
when he stumbled on Astraea. The King of Prussia
Prussia
Prussia was a German kingdom and historic state originating out of the Duchy of Prussia and the Margraviate of Brandenburg. For centuries, the House of Hohenzollern ruled Prussia, successfully expanding its size by way of an unusually well-organized and effective army. Prussia shaped the history...
awarded him an annual pension of 1,200 marks
Mark (money)
Mark was a measure of weight mainly for gold and silver, commonly used throughout western Europe and often equivalent to 8 ounces. Considerable variations, however, occurred throughout the Middle Ages Mark (from a merging of three Teutonic/Germanic languages words, Latinized in 9th century...
for the discovery.

Photometry indicates prograde
Prograde
Prograde can refer to:*Prograde or direct motion, in astronomy, a type of motion of astronomical bodies* Prograde metamorphism, in geology, describes mineral changes in rocks under increasing pressure and/or temperature conditions...
rotation, that the north pole points in the direction of right ascension
Right ascension
Right ascension is the astronomical term for one of the two coordinates of a point on the celestial sphere when using the equatorial coordinate system. The other coordinate is the declination.-Explanation:...
9 h 52 min, declination
Declination
In astronomy, declination is one of the two coordinates of the equatorial coordinate system, the other being either right ascension or hour angle. Declination in astronomy is comparable to geographic latitude, but projected onto the celestial sphere. Declination is measured in degrees north and...
73° with a 5° uncertainty. This gives an axial tilt
Axial tilt
In astronomy, axial tilt is the angle between an object's rotational axis, and a line perpendicular to its orbital plane...
of about 33°. 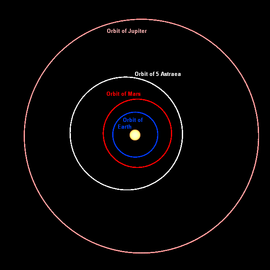 Astraea is physically unremarkable but notable mainly because for 38 years (after the discovery of Vesta
4 Vesta
Vesta, formally designated 4 Vesta, is one of the largest asteroids, with a mean diameter of about . It was discovered by Heinrich Wilhelm Olbers on March 29, 1807, and is named after the Roman virgin goddess of home and hearth, Vesta....
in 1807) it had been thought that there were only four asteroids. In terms of maximum brightness
Apparent magnitude
The apparent magnitude of a celestial body is a measure of its brightness as seen by an observer on Earth, adjusted to the value it would have in the absence of the atmosphere...
, it is indeed only the seventeenth brightest main-belt asteroid, being fainter than 192 Nausikaa
192 Nausikaa
192 Nausikaa is a large main-belt asteroid. It is an S-type asteroid.It was discovered by Johann Palisa on February 17, 1879 at Pula, then in Austria, now in Croatia. The name derives from Nausicaä, a princess in Homer's Odyssey....
and even, at rare near-perihelion oppositions, the highly eccentric carbonaceous 324 Bamberga
324 Bamberga
324 Bamberga is one of the largest asteroids in the asteroid belt. It was discovered by Johann Palisa on February 25, 1892 in Vienna, making it one of the last large asteroids discovered...
.http://www.spacebanter.com/archive/index.php/t-18464.html It will be at magnitude +8.7 on a favorable opposition on February 15, 2016.

There has been only one observed stellar
Star
A star is a massive, luminous sphere of plasma held together by gravity. At the end of its lifetime, a star can also contain a proportion of degenerate matter. The nearest star to Earth is the Sun, which is the source of most of the energy on Earth...
occultation
Occultation
An occultation is an event that occurs when one object is hidden by another object that passes between it and the observer. The word is used in astronomy . It can also refer to any situation wherein an object in the foreground blocks from view an object in the background...
by Astraea (February 2, 1991).