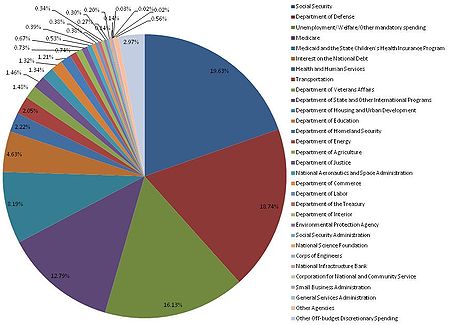 The President's budget request for 2010 totals $3.55 trillion. Percentages in parentheses indicate percentage change compared to 2009. This budget request is broken down by the following expenditures: 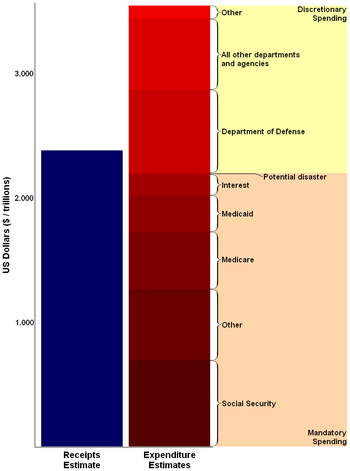 The 2009 budget deficit would represent 12.3% of gross domestic product, the largest share since World War II.

The 2010 Budget proposed by President Barack Obama
Barack Obama
Barack Hussein Obama II is the 44th and current President of the United States. He is the first African American to hold the office. Obama previously served as a United States Senator from Illinois, from January 2005 until he resigned following his victory in the 2008 presidential election.Born in...
projects significant debt increases. A $220 billion increase from the already significant budget shortfall inherited at $1.2 trillion in 2009 from the GW Bush Administration.
The high level of debt and continuing large trade deficits have raised concerns regarding inflation and the value of the dollar relative to other currencies, as well as its place as the primary reserve currency
Reserve currency
A reserve currency, or anchor currency, is a currency that is held in significant quantities by many governments and institutions as part of their foreign exchange reserves...
. The Economist
The Economist
The Economist is an English-language weekly news and international affairs publication owned by The Economist Newspaper Ltd. and edited in offices in the City of Westminster, London, England. Continuous publication began under founder James Wilson in September 1843...
wrote in May 2009: "Having spent a fortune bailing out their banks, Western governments will have to pay a price in terms of higher taxes to meet the interest on that debt. In the case of countries (like Britain and America) that have trade as well as budget deficits, those higher taxes will be needed to meet the claims of foreign creditors. Given the political implications of such austerity, the temptation will be to default by stealth, by letting their currencies depreciate. Investors are increasingly alive to this danger..."


Causes of change in CBO forecasts

CBO data is based only on current law, so policy proposals that have yet to be made law are not included in their analysis.