The Battalion was reassigned on 16 August 1992 to the 3rd Infantry Division and activated in Germany. It inactivated there on 15 January 1994. It reactivated on 16 February 1996 at Fort Benning
Fort Benning
Fort Benning is a United States Army post located southeast of the city of Columbus in Muscogee and Chattahoochee counties in Georgia and Russell County, Alabama...
. Due to the Army's transformation towards a modular force, the 1st Battalion- 30th Infantry Regiment stood down and was redesignated the 3rd Squadron-1st Cavalry in 2006.

The 1st Battalion, 30th Infantry Regiment deployed with the 3rd Brigade, 3rd Infantry Division to Kuwait in January 2003 during the buildup of forces before the invasion of Iraq. When the invasion started on 19, 1 March/30 was one of the first battalions to cross the border, eventually working its way to Tallil, where it fought its first engagement. The day after taking Tallil Airfield
Ali Air Base
Ali Air Base is a military airbase located near Nasiriyah, Iraq. It is also known as Tallil Air Base. At present, the base is being used by United States Armed Forces. It is called Camp Adder by the U.S. Army; the name "Ali Air Base" is used chiefly by the U.S...
, a portion of the battalion's scout platoon was ambushed on a bridge outside of An Nasaria, wounding two of the scouts. One of the scouts and the BN S3 both were later awarded Silver Stars for their actions on the bridge that day. While on Tallil Airfield, the battalion conducted "Operation Dirty Deeds", which consisted of looking for WMDs
Weapons of mass destruction
A weapon of mass destruction is a weapon that can kill and bring significant harm to a large number of humans and/or cause great damage to man-made structures , natural structures , or the biosphere in general...
inside the airfield. After Tallil, 1/30 was ordered to secure the lines of communication and man checkpoints for a couple of days while the rest of the 3rd Brigade continued combat operations in the vicinity.

A few days later, Company B was ordered to participate in an attack on As Samawah while its 1st Platoon continued to hold a defensive position near Nasiriyah
Nasiriyah
Nasiriyah is a city in Iraq. It is on the Euphrates about 225 miles southeast of Baghdad, near the ruins of the ancient city of Ur. It is the capital of the province of Dhi Qar...
. When the Fedayeen were defeated in As Samawah and 1st Platoon rejoined the company, 1/30 continued its movement north with the rest of 3rd Brigade. At the same time this was happening, C Company was ordered to march over 35 km to support the taking of OBJ Vikings, a bridge outside the city of Ash shinafiya. C Co took with them the Mortar Platoon, B Section from the scout platoon and the Forward Aid Station. The Battalion made history by holding the longest front of any conflict during this time. While C Co was holding the objective, three tanks, one of the scouts vehicles and an M113 got in an extended firefight on the opposite side of the bridge during a patrol. The engagement ended with 35 or more Iraqi soldiers killed, and not one American casualty. This firefight was documented by Time Magazine's Alex Perry. He and his photographer were in the M113 during the firefight. 1/30 next saw action at Karbala, where it secured the Karbala Gap in order to allow the safe passage of 3rd Brigade in its movement towards Baghdad. 1/30 held Karbala Gap for two days until relieved by elements from the 101st Airborne Division. During those two days, Company B of 1/30, most notably 1st and 3rd Platoons, inflicted heavy losses on Iraqi Republican Guard units on the outskirts of the city. The Scout Platoon and D Troop 10th Cavalry, the 3rd Brigades Reconnaissance Troop also inflicted heavy losses on the Medina Republican Guard Division with artillery fire and by spotting rounds for the Bradley Fighting Vehicles as they fired into the city.

After Karbala, 1/30 rejoined 3rd Brigade and continued its march on Baghdad. On 6 April, the battalion reached the city and, with Company B, 1st Platoon in the lead, fought several engagements with defending Republican Guard units. By 10 April, the battalion pushed its way into Baghdad and set up its headquarters at a water-treatment facility in the northwestern sector of the city. It participated in combat patrols and humanitarian relief missions until relieved in June 2003.

1st Battalion, 30th Infantry moved back to Kuwait in June 2003 and flew back to Fort Benning
Fort Benning
Fort Benning is a United States Army post located southeast of the city of Columbus in Muscogee and Chattahoochee counties in Georgia and Russell County, Alabama...
, Georgia at the end of July. The unit again saw action during Operation Iraqi Freedom III. 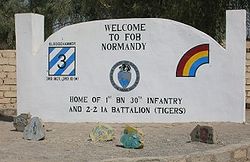 The 1st Battalion, 30th Infantry Regiment deployed from Fort Benning on 8 January 2005. The deployment began in Kuwait
Kuwait
The State of Kuwait is a sovereign Arab state situated in the north-east of the Arabian Peninsula in Western Asia. It is bordered by Saudi Arabia to the south at Khafji, and Iraq to the north at Basra. It lies on the north-western shore of the Persian Gulf. The name Kuwait is derived from the...
, where the battalion prepared its equipment and conducted final training exercises prior moving north to Iraq. 1–30 Infantry Battalion then road marched by land and air into FOB Normandy, Iraq on 21 January 2005. Company B was attached to the 3rd Brigade, 42nd Infantry Division (New York National Guard) Headquarters at FOB Warhorse, to serve as a Quick reaction force
Quick reaction force
Quick Reaction Force or is a military unit, generally platoon-sized in the United States Marine Corps, that is capable of rapid response to developing situations. They are to have equipment ready, to respond to any type of emergency, typically within ten minutes or less, although this is based on...
. In Iraq 1st Battalion, 30th Infantry Regiment was organized as Task Force, 1st Battalion, 30th Infantry Regiment, which included B Battery 1st Battalion, 10th Artillery Regiment and B Company 2nd Battalion, 34th Armor Regiment
34th Armor Regiment (United States)
The 34th Armor Regiment is an armored regiment of the United States Army formed in 1941.-Lineage:Constituted 28 August 1941 in the Regular Army as the 34th Armored Regiment and assigned to the 5th Armored Division...
. The next 11 months Task Force 1–30 conducted several operations throughout the province of Diyalah.

In June 2005, Company B, 1/30 Infantry, was attached to 2nd Battalion, 69th Armor Regiment, and moved to Ar Ramadi, in the Anbar Province. Company B, 1/30 Infantry was a vital part of 2/69 AR for the following seven months as it participated in over 200 combat missions and was responsible for over 500 enemy KIA. Its most notable actions occurred in two separate battles at ECP 5 in eastern Ramadi. The first engagement involved 1st Platoon, Company B, and a platoon from a Pennsylvania National Guard unit. On 15 September 2005, hundreds of enemy combatants launched a coordinated attack across Ramadi. In the east, the focal point became ECP 5. 1st Platoon, Company B, serving as 2/69's Quick reaction force
Quick reaction force
Quick Reaction Force or is a military unit, generally platoon-sized in the United States Marine Corps, that is capable of rapid response to developing situations. They are to have equipment ready, to respond to any type of emergency, typically within ten minutes or less, although this is based on...
, responded in record time to the attack on the ECP and was responsible for killing over 65 enemy personnel, as well as saving the badly outnumbered guardsmen. One month later, another large group of enemy combatants again attacked ECP 5. 3rd Platoon, Company B, responded and had nearly identical results as 1st Platoon. Company B suffered two KIA and over a dozen wounded in Ramadi.
In January 2006, Company B rejoined the rest of 1/30 in Kuwait.

During the months of January and February 2005, 1st Battalion, 30th Infantry Regiment prepared its soldiers and equipment for future operations in Iraq. In Kuwait the Battalion conducted several weapons ranges, added armor on vehicles, and tested equipment. The month of January was finished by the GAC, Ground Assault Convoy, into Iraq. Over 800 soldiers, 100 vehicles, and several containers of equipment all traveled over 300 miles (482.8 km) into the heart of Iraq. The success of our time in Iraq is mainly attributed to the excellent preparation in Kuwait.

Between March and December 2005, Task Force 1–30 Infantry conducted several operations. These operations ranged from Offensive Coalition operations to Civil Military Affair operations intended to rebuild and instill democracy in the local Iraqi population. With every operation the Task Force partnered with Iraqis to complete the mission. In March, Task Force 1–30 conducted its first major operation in the city of Mansuriyat-Al-Jabal, known as Operation Spring Cleaning. The operation resulted in the successful capture of eight HVIs and a large weapons cache. In April 2005, Task Force 1–30 conducted Operation Morning Rain into Mukhisa – Abu Karmah, which resulted in the capture of several enemy fighters and capture several of weapons caches.

In July 2005, Task Force 1–30 with Iraqi Army and Iraqi Police conducted Operation Longest Yard which also ended with the capture of several enemy fighters and capture of several weapons caches. The mission statement from the Task Force Commander states, “TF 1–30 trains and develops Iraqi Security Forces, conducts Civil Military Operations, and neutralizes Anti Iraqi Forces in order to contribute to Iraqi self-reliance in area or operation BATTLE. On order, TF 1–30 conducts out-of-sector combat operations to destroy enemy forces in order to prevent the enemy from disrupting progress toward Iraqi self-reliance.” The statement has been our guide and the reason for Task Force 1–30th success during OIF III.

In January 2006 Task Force 1–30 was redeployed from Iraq to Fort Benning in the United States.

The 1st Battalion, 30th Infantry Regiment was reinstated on 6 September 2006, at Fort Stewart in a re-flagging ceremony. The regiment took over the 3rd Battalion, 15th Infantry Regiment's place as part of the reorganization to modular units of actions for the 3rd Infantry Division. 1–30 Infantry battalion is currently gearing up for deployment to northern Iraq in fall of 2009.
The source of this article is wikipedia, the free encyclopedia.  The text of this article is licensed under the GFDL.