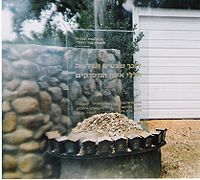 The 1997 Israeli helicopter disaster occurred on 4 February 1997. 73 IDF
Israel Defense Forces
The Israel Defense Forces , commonly known in Israel by the Hebrew acronym Tzahal , are the military forces of the State of Israel. They consist of the ground forces, air force and navy. It is the sole military wing of the Israeli security forces, and has no civilian jurisdiction within Israel...
soldiers were killed when two Sikorsky CH-53 Sea Stallion Yas'ur 2000
CH-53 Sea Stallion
The CH-53 Sea Stallion is the most common name for the Sikorsky S-65 family of heavy-lift transport helicopters. Originally developed for use by the United States Marine Corps, it is also in service with Germany, Iran, Israel, and Mexico...
helicopters, 357 and 903, collided over She'ar Yashuv
She'ar Yashuv
She'ar Yashuv is a workers' moshav in the Upper Galilee in the northeastern Hula Valley in northern Israel. It belongs to the Mevo'ot HaHermon Regional Council....
in northern Israel
Israel
The State of Israel is a parliamentary republic located in the Middle East, along the eastern shore of the Mediterranean Sea...
. The helicopters were supposed to have crossed the border into Israel's "security zone
Israeli Security Zone
The Israeli Security Zone in southern Lebanon was a strip of territory of varying width, , from the Israeli border and the Golan Heights, occupied by Israeli forces from 1985 to 2000. Additional regions controlled by the South Lebanon Army are sometimes included under the term...
" in Lebanon
Lebanon
Lebanon , officially the Republic of LebanonRepublic of Lebanon is the most common term used by Lebanese government agencies. The term Lebanese Republic, a literal translation of the official Arabic and French names that is not used in today's world. Arabic is the most common language spoken among...
, but were hovering while waiting for official clearance to go. Previously Israel had moved troops by ground, but this policy was changed as the threat of roadside bombs from Hezbollah increased.

The crash brought about widespread national grieving. Thursday, 6 February, was declared an official day of mourning, and Prime Minister Benjamin Netanyahu
Benjamin Netanyahu
Benjamin "Bibi" Netanyahu is the current Prime Minister of Israel. He serves also as the Chairman of the Likud Party, as a Knesset member, as the Health Minister of Israel, as the Pensioner Affairs Minister of Israel and as the Economic Strategy Minister of Israel.Netanyahu is the first and, to...
and President Ezer Weizman
Ezer Weizman
' was the seventh President of Israel, first elected in 1993 and re-elected in 1998. Before the presidency, Weizman was commander of the Israeli Air Force and Minister of Defense.-Biography:...
attended funerals and visited the grieving families. In addition, thousands of Israelis went to pray at the Western Wall
Western Wall
The Western Wall, Wailing Wall or Kotel is located in the Old City of Jerusalem at the foot of the western side of the Temple Mount...
and assemblies were held at schools nationwide.

A commission headed by David Ivry
David Ivry
David Ivry was the Israeli Ambassador to the United States from 2000 to 2002, and the ninth commander of the Israeli Air Force . In 1999, he was appointed first director of the Israeli National Security Council.-Biography:...
was set up to investigate the cause of the collision, the deadliest air disaster in Israeli history. The committee finished its investigation in mid-April of the same year. It had been unable to find the definite cause of the mid-air collision, noting that the pilots appeared in good health and that no external causes could be found.