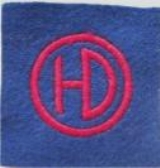 Encyclopedia
The 152nd Infantry Brigade (part of The 51st (Highland) Division) was a British Territorial Army division that fought during the Second World War. The division was referred to as the "Highway Decorators" by other divisions who became used to discovering the 'HD' insignia painted wherever the Highlanders had passed through.

The original 152nd Brigade, formed along with the division in 1937, was effectively destroyed when the 51st (Highland) Division surrendered at St Valery-en-Caux on 12 June 1940. It was reformed in August 1940 from the 26th Infantry Brigade of the 9th (Highland) Infantry Division which was renumbered as the 51st Division.