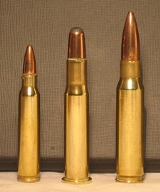 Encyclopedia
The .223 Remington is a sporting cartridge
Cartridge (firearms)
A cartridge, also called a round, packages the bullet, gunpowder and primer into a single metallic case precisely made to fit the firing chamber of a firearm. The primer is a small charge of impact-sensitive chemical that may be located at the center of the case head or at its rim . Electrically...
with almost the same external dimensions as the 5.56×45mm NATO military
Military
A military is an organization authorized by its greater society to use lethal force, usually including use of weapons, in defending its country by combating actual or perceived threats. The military may have additional functions of use to its greater society, such as advancing a political agenda e.g...
cartridge. The name is commonly pronounced either two-two-three or two-twenty-three. It is loaded with a 0.224 inches (5.7 mm) diameter, jacketed bullet, with weights ranging from 40 gr, though the most common loading by far is 55 gr. When loaded with a bullet that expands, tumbles, or fragments in tissue, this cartridge is capable of delivering devastating terminal performance.

While the external case dimensions are very similar, the .223 Remington and 5.56x45mm differ in both maximum pressure and chamber shape. The maximum and mean pressures for some varieties of the 5.56 mm (different cartridge designations have different standards) exceed the SAAMI
Sporting Arms and Ammunition Manufacturers' Institute
The Sporting Arms and Ammunition Manufacturers' Institute is an association of American firearms and ammunition manufacturers...
maximums for the .223 Remington, and the methods for measuring pressures differ between NATO and SAAMI. The 5.56 mm chamber specification has also changed over time since its adoption, as the current military loading (NATO SS-109 or US M855) uses longer, heavier bullets than the original loading did. This has resulted in a lengthening of the throat in the 5.56 mm chamber. Thus, while .223 Remington ammunition can be safely fired in a 5.56 mm chambered gun, firing 5.56 mm ammunition in a .223 Remington chamber may produce pressures in excess of even the 5.56 mm specifications due to the shorter throat.

Americans would define the shoulder angle at alpha/2 = 23 degrees. The common rifling
Rifling
Rifling is the process of making helical grooves in the barrel of a gun or firearm, which imparts a spin to a projectile around its long axis...
twist rate for this cartridge is 305 mm (1 in 12 in), 6 grooves, Ø lands = 5.56 millimetre (0.218897637795276 in), Ø grooves = 5.69 millimetre (0.224015748031496 in), land width = 1.88 millimetre (0.0740157480314961 in) and the primer type
Percussion cap
The percussion cap, introduced around 1830, was the crucial invention that enabled muzzleloading firearms to fire reliably in any weather.Before this development, firearms used flintlock ignition systems which produced flint-on-steel sparks to ignite a pan of priming powder and thereby fire the...
is small rifle.

According to the official Commission Internationale Permanente pour l'Epreuve des Armes à Feu Portatives
Commission Internationale Permanente pour l'Epreuve des Armes à Feu Portatives
The Commission Internationale Permanente pour l'Epreuve des Armes à Feu Portatives is an international organisation whose members are 14 states, mainly European....
(C.I.P.) guidelines the .223 Remington case can handle up to 430 megapascals (62,366 psi) piezo pressure. In C.I.P. regulated countries every rifle cartridge combo has to be proofed
Proof test
A proof test is a test wherein a deliberately over-pressured round is fired from a firearm in order to verify that the firearm is not defective and will not explode on firing. The firearm is inspected after the test, and if it is found to be in sound condition, then it is marked with a proof mark...
at 125% of this maximum C.I.P. pressure to certify for sale to consumers. This is equal to the NATO maximum service pressure guideline for the 5.56x45mm NATO
5.56x45mm NATO
5.56×45mm NATO is a rifle cartridge developed in the United States and originally chambered in the M16 rifle. Under STANAG 4172, it is a standard cartridge for NATO forces as well as many non-NATO countries. It is derived from, but not identical to, the .223 Remington cartridge...
cartridge.

The .223 Remington is one of the most common rifle cartridges in use in the United States, being widely used in two types of rifles: (1) varmint rifle
Varmint rifle
Varmint rifle is an American English term for a small-caliber firearm or high-powered air gun primarily used for varmint hunting — killing non-native or non-game animals such as rats, house sparrows, starling, crows, ground squirrels, gophers, jackrabbits, marmots, groundhogs, porcupine,...
s, most of which are bolt action and commonly have 1-in-12 rifling
Rifling
Rifling is the process of making helical grooves in the barrel of a gun or firearm, which imparts a spin to a projectile around its long axis...
twist suitable for bullet
Bullet
A bullet is a projectile propelled by a firearm, sling, or air gun. Bullets do not normally contain explosives, but damage the intended target by impact and penetration...
s between 38 gr, and (2) semi-automatic rifle
Semi-automatic rifle
A semi-automatic rifle is a type of rifle that fires a single bullet each time the trigger is pulled, automatically ejects the spent cartridge, chambers a fresh cartridge from its magazine, and is immediately ready to fire another shot...
s such as the AR-15
AR-15
The AR-15 is a lightweight, 5.56 mm, air-cooled, gas-operated, magazine-fed semi-automatic rifle, with a rotating-lock bolt, actuated by direct impingement gas operation. It is manufactured with the extensive use of aluminum alloys and synthetic materials....
and the Ruger Mini-14, which are commonly found to have twist rates of 1-in-7, 1-in-9, or 1-in-8. (Most modern AR-15s use 1-in-9 which is suitable for bullets up to 69 gr or 1-in-7 which is suitable for slightly heavier bullets, but older AR-15s used 1-in-12 twist rates, making them suitable for use with bullets of 55 gr.) The semi-automatic rifle category is often used by law enforcement, for home defense, and for varmint hunting. Among the many popular modern centerfire
Centerfire ammunition
A centerfire cartridge is a cartridge with a primer located in the center of the cartridge case head. Unlike rimfire cartridges, the primer is a separate and replaceable component....
rifle cartridges, .223 Remington ammunition is among the least expensive and is often used by avid target shooters, particularly in the "service rifle" category or 3 gun matches.

While there is a myth that 5.56 NATO cases are thicker and hence have less capacity than commercial .223 cases, this has been shown to be false. Each brand of case and each manufacturing lot has a slightly different case capacity; 5.56 NATO and .223 commercial cases tend to have nearly identical case capacity when measured using the water test. The NATO specification allows a higher chamber pressure. NATO EPVAT
NATO EPVAT testing
NATO EPVAT testing is one of the three recognized classes of procedures used in the world to control the safety and quality of firearms ammunition....
test barrels made for 5.56mm NATO measure chamber pressure at the case mouth, as opposed to the location used by the United States civil standards organization SAAMI. The piezoelectric sensor
Piezoelectric sensor
A piezoelectric sensor is a device that uses the piezoelectric effect to measure pressure, acceleration, strain or force by converting them to an electrical charge.-Applications:...
s or transducers NATO and SAAMI use to conduct the actual pressure measurements also differ. This difference in measurement method accounts for upwards of 137.9 megapascals (20,000.7 psi) difference in pressure measurements. This means the NATO EPVAT maximum service pressure of 430 megapascals (62,366.2 psi) for 5.56mm NATO, is reduced by SAAMI to 379.21 megapascals (54,999.8 psi) for .223 Remington. In contrast to SAAMI, the other main civil standards organization C.I.P.
Commission Internationale Permanente pour l'Epreuve des Armes à Feu Portatives
The Commission Internationale Permanente pour l'Epreuve des Armes à Feu Portatives is an international organisation whose members are 14 states, mainly European....
defines the maximum service and proof test pressures of the .223 Remington cartridge equal to the 5.56mm NATO.

The 5.56mm NATO chambering, known as a NATO or mil-spec chamber, has a longer leade, which is the distance between the mouth of the cartridge and the point at which the rifling engages the bullet. The .223 Remington chambering, known as SAAMI chamber, is allowed to have a shorter leade, and is only required to be proof test
Proof test
A proof test is a test wherein a deliberately over-pressured round is fired from a firearm in order to verify that the firearm is not defective and will not explode on firing. The firearm is inspected after the test, and if it is found to be in sound condition, then it is marked with a proof mark...
ed to the lower SAAMI chamber pressure. To address these issues, various proprietary chambers exist, such as the Wylde chamber (Bill Wylde) or the ArmaLite
ArmaLite
ArmaLite is the name of a small arms engineering facility founded in the early 1950s, and once associated with the Fairchild Engine and Airplane Corporation. ArmaLite was formally incorporated as a subdivision of Fairchild on October 1, 1954...
chamber, which are designed to handle both 5.56mm NATO and .223 Remington equally well. The dimensions and leade of the .223 Remington minimum C.I.P. chamber also differ from the 5.56mm NATO chamber specification.

Using commercial .223 Remington cartridges in a 5.56mm NATO chambered rifle should work reliably, but generally will not be as accurate as when fired from a .223 Remington chambered gun due to the longer leade. Using 5.56mm NATO mil-spec cartridges (such as the M855) in a .223 Remington chambered rifle can lead to excessive wear and stress on the rifle and even be unsafe, and the SAAMI recommends against the practice. Some commercial rifles marked as ".223 Remington" are in fact suited for 5.56mm NATO, such as many commercial AR-15 variants and the Ruger Mini-14, but the manufacturer should always be consulted to verify that this is acceptable before attempting it, and signs of excessive pressure (such as flattening or gas staining of the primers) should be looked for in the initial testing with 5.56mm NATO ammunition.

P.O. Ackley created an improved version of this cartridge called the .223 Ackley Improved. It has the straight sides and steep shoulder typical of the Ackley design improvements, yielding about 5% extra case volume. This in turn provides longer case life, less stretching, and up to 100 ft/s (30.5 m/s) faster velocities.

Wildcat cartridge
Wildcat cartridge
A wildcat cartridge, or wildcat, is a custom cartridge for which ammunition and firearms are not mass produced. These cartridges are often created in order to optimize a certain performance characteristic of an existing commercial cartridge.Developing and using wildcat cartridges does not...
developers have for a long time necked this cartridge up to create the 6mm/223 or 6×45. At one time this round was very popular for varminting and competition but has been replaced by current popular competition cartridges using short fat cases, such as the 6 mm PPC
6 mm PPC
The 6 mm PPC , or 6 PPC as it is more often called, is a centerfire rifle cartridge used almost exclusively for benchrest shooting. At distances out to 300 yards, it is one of the most accurate cartridges available...
and the 6mm Norma BR
6mm Norma BR
The 6mm BR is a centerfire cartridge created for benchrest shooting. The cartridge is also known as the 6mm Bench Rest or simply 6 BR, and has also developed a following among varmint hunters because of its efficiency...
.