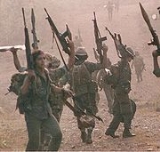 1985    Sandinista Daniel Ortega becomes president of Nicaragua and vows to continue the transformation to socialism and alliance with the Soviet Union and Cuba; American policy continues to support the Contras in their revolt against the Nicaraguan government.