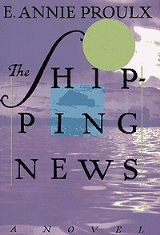 Quotations
The Shipping News is a novel by Annie Proulx.


The ocean twitched like a vast cloth spread over snakes. (193)
x