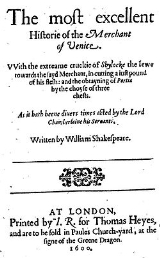 Quotations
The Merchant of Venice is one of William Shakespeare's best-known plays. It was written between 1596 and 1598.