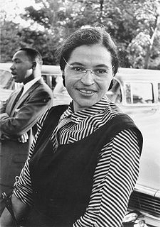 Quotations
Rosa Louise McCauley Parks (1913-02-04 – 2005-10-24) was an African American civil rights activist and seamstress whom the U.S. Congress dubbed the "Mother of the Modern-Day Civil Rights Movement". She is famous for her refusal on December 1, 1955 to obey bus driver James Blake's demand that she relinquish her seat to a white man.