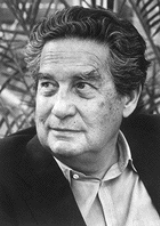 Quotations
Octavio Paz was born Octavio Paz Lozano in Mexico City in the middle of the Mexican Revolution. He was a poet, writer, and diplomat, and the winner of the 1990 Nobel Prize in Literature. He was the first Mexican writer to become a Nobel Laureate.

I go among your body as among the world,
your belly the sunlit center of the city,
your breasts two churches where are celebrated
the great parallel mysteries of the blood,
the looks of my eyes cover you like ivy,
you are a city by the sea assaulted,
you are a rampart by the light divided
into two halves, distinct, color of peaches,
and you are saltiness, you are rocks and birds
beneath the edict of concentrated noon

and dressed in the coloring of my desires
you go as naked as my thoughts go naked,
I go among your eyes as I swim water,
the tigers come to these eyes to drink their dreams,
the hummingbird is burning among these flames,
I go upon your forehead as on the moon,
like cloud I go among your imagining
journey your belly as I journey your dream,

your loins are harvest, a field of waves and singing,
your loins are crystal and your loins are water,
your lips, your hair, the looks you give me, they
all night shower down like rain, and all day long
you open up my breast with your fingers of water,
you close my eyelids with your mouth of water,
raining upon my bones, and in my breast
the roots of water drive deep a liquid tree,

I travel through your waist as through a river,
I voyage your body as through a grove going,
as by a footpath going up a mountain
and suddenly coming upon a steep ravine
I go the straitened way of your keen thoughts
break through to daylight upon your white forehead
and there my spirit flings itself down, is shattered
now I collect my fragments one by one
and go on, bodiless, searching, in the dark....

you take on the likeness of a tree, a cloud,
you are all birds and now you are a star,
now you resemble the sharp edge of a sword
and now the executioner's bowl of blood,
the encroaching ivy that over grows and then
roots out the soul and divides it from itself,

If you are the amber mare

I am the road of blood

If you are the first snow

I am he who lights the hearth of dawn

If you are the tower of night

I am the spike burning in your mind

If you are the morning tide

I am the first bird's cry

If you are the basket of oranges

I am the knife of the sun

If you are the stone altar

I am the sacrilegious hand

If you are the sleeping land

I am the green cane

If you are the wind's leap

I am the buried fire

If you are the water's mouth

I am the mouth of moss

If you are the forest of the clouds

I am the axe that parts it

If you are the profaned city

I am the rain of consecration

If you are the yellow mountain

I am the red arms of lichen

If you are the rising sun

I am the road of blood

invent another body for your body


Between going and staying the day wavers,
in love with its own transparency.

The circular afternoon is now a bay
where the world in stillness rocks.

All is visible and all elusive,
all is near and can't be touched.

Paper, book, pencil, glass,
rest in the shade of their names.

Time throbbing in my temples repeats
the same unchanging syllable of blood.

The light turns the indifferent wall
into a ghostly theater of reflections.

I find myself in the middle of an eye,
watching myself in its blank stare.

The moment scatters. Motionless,
I stay and go: I am a pause.


I am a man: little do I last
and the night is enormous.
But I look up:
the stars write.
Unknowing I understand:
I too am written,
and at this very moment
someone spells me out.


The Labyrinth of Solitude