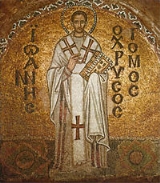 Quotations
Saint John Chrysostom Greek Ioannes Chrysostomos, early Christian theologian, archbishop of Constantinople, saint. "Chrysostom" means "Golden-mouthed", a tribute to his exemplary talent as an orator. His writings were originally written in Greek. Outside the Christian tradition Chrysostom is noted for eight of his sermons which played a considerable part in the history of Christian antisemitism, and were extensively misused by the Nazis in their ideological campaign against the Jews.