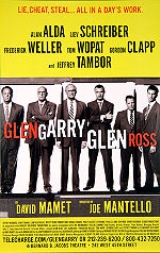 Quotations
Glengarry Glen Ross is a 1984 Pulitzer Prize-winning play by David Mamet. It was made into a 1992 film of the same name.