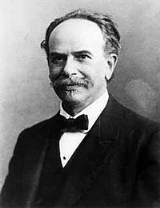 Quotations
Franz Boas was a German-American anthropologist and a pioneer of modern anthropology who has been called the "Father of American Anthropology".