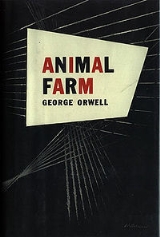 Quotations
Animal Farm is a satirical novella (which can also be understood as a modern fable or allegory) by George Orwell, ostensibly about a group of animals who oust the humans from the farm on which they live. They run the farm themselves, only to have it degenerate into a brutal tyranny of its own.