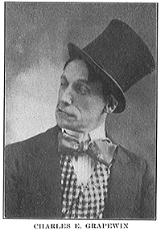 Janisann46
Can anyone please tell me how I might find the names of the trio comedy acrobats The LaMaze Brothers. I have a few articles about them but I would like to find their actual names because I was told one of them was related to me. Thank you
Save
Cancel
Reply
replied to:  Janisann46

Replied to:  Can anyone please tell me how I might find the names...
Are you referring to an act that had two of the acrobats dressed in tuxedos (or at least "formal attire" and one acrobat that was dressed as a white-faced(?)clown? They toured US and Europe?
If so, I may be able to shed a little light on this.
Save
Cancel
Reply
replied to:  Sunnyfield

Replied to:  Are you referring to an act that had two of the...
Hello, actually they were three brothers, 2 of whom were somewhat of clowns and the other in the suit, called "a straight man", is my great-grandfather. I noticed that someone was looking for some info because she thinks she might be related. Could you give me her contact info if still there so I can help?
Thank you
Save
Cancel
Reply
replied to:  sflournoy

Replied to:  Hello, actually they were three brothers, 2 of whom were somewhat...
Some of the Lamaze brothers may have been related but my grandfather,John Fritz,was not related to the others.
I posted my response above hoping the writer would return to this forum and see my answer. I even found a similar user name on Ebay and wrote to the owner but received no reply.
I have some photos and documents from the Lamaze brothers act. Most were given to my cousin whose last name is Fritz. I'm not in contact with him and don't know what he may have done with them.
I have the ship's passenger list from when the act performed in Europe. Listed under "Second Cabin" are:
Mr. & Mrs. John Lamaze (my grandparents)
Mr. Chris Lamaze
Mr. Fred Lamaze
Mr. Josef Lamaze.
If your grandfather was the straight man who wore a top hat and tails, I have a photo of him with the two clowns (one of which was my grandfather). We had a HUGE amount of their costumes and props in our cellar in Brooklyn NY including the infamous "folding stairs".Alas, none survive!
My grandmother would state emphatically that the Lamaze Brothers act was vaudeville NOT burlesque!
If you're interested in more discussion, write to me at Sunnyfield@aol.com. I'm Dave.
Save
Cancel
Reply
x