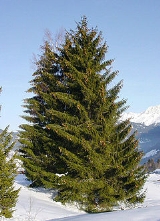 (4)   Dress and groom with particular care, as for a special occasion
"He spruced up for the party"
(5)   Make neat, smart, or trim
"Spruce up your house for Spring"
"Titivate the child"

From an alteration of Pruce ("Prussia"); Spruce, spruse (1412), and Sprws (1378) were generic terms for commodities brought to England by Hanseatic merchants (beer, wood, leather). The tree with this name was also believed to have been native to Prussia. The adjective and verb senses ("trim, neat" and "to make trim, neat") are attested from 1594, and originate with spruce leather (1466), which was used to make a popular style of jerkins in the 1400s that was considered smart-looking.