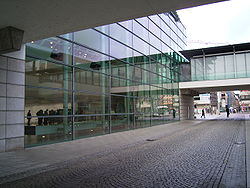 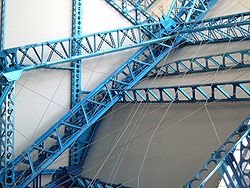 The Zeppelin Museum in Friedrichshafen
Friedrichshafen
This article is about a German town. For the Danish town, see Frederikshavn, and for the Finnish town, see Fredrikshamn .Friedrichshafen is a university city on the northern side of Lake Constance in Southern Germany, near the borders with Switzerland and Austria.It is the district capital of the...
at Lake Constance
Lake Constance
Lake Constance is a lake on the Rhine at the northern foot of the Alps, and consists of three bodies of water: the Obersee , the Untersee , and a connecting stretch of the Rhine, called the Seerhein.The lake is situated in Germany, Switzerland and Austria near the Alps...
(Bodensee) chronicles the history of the Zeppelin
Zeppelin
A Zeppelin is a type of rigid airship pioneered by the German Count Ferdinand von Zeppelin in the early 20th century. It was based on designs he had outlined in 1874 and detailed in 1893. His plans were reviewed by committee in 1894 and patented in the United States on 14 March 1899...
airships in the city where they were born. The museum, housed inside the former Hafenbahnhof (Harbor Train Station), opened in 1996.

The centerpiece of the museum is a reconstruction of a 33-m section of the LZ 129 Hindenburg
LZ 129 Hindenburg
LZ 129 Hindenburg was a large German commercial passenger-carrying rigid airship, the lead ship of the Hindenburg class, the longest class of flying machine and the largest airship by envelope volume...
, created by Zeppelin GmbH. The lower level (B-Deck) of the reconstruction includes restrooms and the smoking parlor (not accessible by visitors). The upper level (A-Deck) includes the lounge, writing room, promenade, and some passenger rooms.

Airship artifacts on display include an engine gondola of the LZ 127 Graf Zeppelin
LZ 127 Graf Zeppelin
LZ 127 Graf Zeppelin was a German built and operated passenger-carrying hydrogen-filled rigid airship which operated commercially from 1928 to 1937. It was named after the German pioneer of airships, Ferdinand von Zeppelin, who was a Graf or Count in the German nobility. During its operating life,...
and the frontmost portion of the bow of the LZ 130 Graf Zeppelin
LZ 130 Graf Zeppelin
The Graf Zeppelin II was the last of the great German rigid airships built by the Zeppelin Luftschiffbau during the period between the World Wars, the second and final ship of the Hindenburg class named in honor of Paul von Hindenburg...
. Items salvaged from the fire
Hindenburg disaster
The Hindenburg disaster took place on Thursday, May 6, 1937, as the German passenger airship LZ 129 Hindenburg caught fire and was destroyed during its attempt to dock with its mooring mast at the Lakehurst Naval Air Station, which is located adjacent to the borough of Lakehurst, New Jersey...
at Lakehurst are also on display.

The museum contains an archive and a research library.

The top floor of the museum displays artwork not related to Zeppelin history, including paintings by Otto Dix
Otto Dix
Wilhelm Heinrich Otto Dix was a German painter and printmaker, noted for his ruthless and harshly realistic depictions of Weimar society and the brutality of war. Along with George Grosz, he is widely considered one of the most important artists of the Neue Sachlichkeit.-Early life and...
.