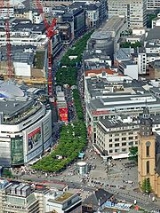 Encyclopedia
The Zeil is a street in the city centre of Frankfurt
Frankfurt
Frankfurt am Main , commonly known simply as Frankfurt, is the largest city in the German state of Hesse and the fifth-largest city in Germany, with a 2010 population of 688,249. The urban area had an estimated population of 2,300,000 in 2010...
, Germany
Germany
Germany , officially the Federal Republic of Germany , is a federal parliamentary republic in Europe. The country consists of 16 states while the capital and largest city is Berlin. Germany covers an area of 357,021 km2 and has a largely temperate seasonal climate...
. The name, which dates back to the 14th century, is derived from the German word Zeile 'row' and originally referred to a row of houses on the eastern end of the north side; the name was not extended to the entire street until later.

Since the end of the 19th century it has been one of the most famous and busiest shopping streets in Germany. Before World War II
World War II
World War II, or the Second World War , was a global conflict lasting from 1939 to 1945, involving most of the world's nations—including all of the great powers—eventually forming two opposing military alliances: the Allies and the Axis...
it was also known for its grand buildings, but most of them were destroyed and not rebuilt. The western part of the Zeil is a pedestrian zone between two large plazas, Hauptwache
Hauptwache (Frankfurt am Main)
The Hauptwache is a central point of Frankfurt am Main and is one of the most famous plazas in the city. The original name Schillerplatz was superseded in the early 1900s.- The Hauptwache building :...
in the west and Konstablerwache
Konstablerwache
Konstablerwache is a central square in the centre of Frankfurt am Main and part of its pedestrian zone. It lies to the east of Hauptwache with both squares linked by the Zeil, the central shopping area of the city.-History:...
in the east. These two plazas serve as major intersections for underground trains, trams and buses. The eastern part of the Zeil, called "New Zeil", connects Konstablerwache with the Friedberger Anlage.

The Zeil underwent a major renovation from spring 2008 until summer 2009. The pedestrian zone was extended to the west as far as the Börsenstraße. This brought drastic changes for motorists because the route via Hauptwache, which is an important north-south connection for individual traffic, was closed.