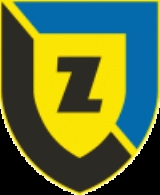 Encyclopedia
Zawisza Bydgoszcz is a military-sponsored sports club from Bydgoszcz, Poland
Poland
Poland , officially the Republic of Poland , is a country in Central Europe bordered by Germany to the west; the Czech Republic and Slovakia to the south; Ukraine, Belarus and Lithuania to the east; and the Baltic Sea and Kaliningrad Oblast, a Russian exclave, to the north...
, founded in 1946. Its name commemorates a legendary Polish 15th century knight, Zawisza Czarny
Zawisza Czarny
Zawisza Czarny z Garbowa , Sulima Coat of Arms, was a Polish knight and nobleman. He served as a soldier and diplomat under the Polish king Władysław II and Hungarian-Bohemian king Sigismund of Luxembourg...
(Zawisza the Black). The club holds many sections: football, track and field athletics, boxing, rowing, canoeing, weightlifting, gymnastics, shooting, and parachuting ones.

Zawisza's football team has achieved some successes, playing for several years in the Polish First Division. For the first time, Zawisza won promotion in 1961. After relegation in the 1993/1994 season, the team has not managed to get back to the First Division. Zawisza's biggest achievement is reaching the semifinals of the Cup of Poland
Polish Cup
The Polish Cup in football or officially Remes Puchar Polski, is an elimination tournament for Polish football clubs, held continuously from 1950, and is the second most important national title in Polish football after the Ekstraklasa title...
in 1991. Zawisza's youth teams have also won several medals during the national championships - gold (1981), silver (1958, 1986) and bronze (1967, 1979). Zawisza was relegated from Second Level to Fourth Level in the 1997-98 season and promoted to Third Level after finishing 1st Kujawsko-Pomorsko-Wielkopolska (Kujavia-Pomerania and Great Poland) Group of 3rd liga in the 2007-2008 season. On 12 June 2011, after a 13 year absence, Zawisza was promoted to the Second Level (Pierwsza Liga) after finishing second to Olimpia Grudziądz in the Druga Liga Zachodnia (one of two Third Level divisions) in the 2010-11 season.

Zbigniew Boniek
Zbigniew Boniek
Zbigniew "Zibì" Kazimierz Boniek is a former Polish footballer and coach. He first played at Zawisza Bydgoszcz and later at Widzew Łódź. Boniek was named by Pelé as one of the 125 Greatest Living Footballers and by FIFA as one of the 100 best-ever players. On 12 October 2009 he received a Golden...
Stefan Majewski
Stefan Majewski
Stefan Majewski is a retired Polish soccer player and subsequently a football manager who recently was the interim manager of the Polish national team.-Career:...
Andrzej Brończyk Paweł Kryszałowicz Piotr Nowak
Piotr Nowak
Piotr Nowak is a Polish former professional soccer player. He is currently the head coach of the Philadelphia Union in Major League Soccer.Nowak enjoyed a successful playing career in Europe, playing for Polish clubs such as Zawisza Bydgoszcz and Widzew Łódź, before going on to play in Turkey,...
Sławomir Wojciechowski Wojciech Łobodziński
The source of this article is wikipedia, the free encyclopedia.  The text of this article is licensed under the GFDL.