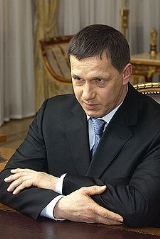 Encyclopedia
Yuri Petrovich Trutnev (born March 1, 1956) is a Russian politician. Since 2004, he is Minister of Natural Resources and the Environment of the Russian Federation.

He was chosen mayor
Mayor
In many countries, a Mayor is the highest ranking officer in the municipal government of a town or a large urban city....
of the city of Perm
Perm
Perm is a city and the administrative center of Perm Krai, Russia, located on the banks of the Kama River, in the European part of Russia near the Ural Mountains. From 1940 to 1957 it was named Molotov ....
in 1996 (achieving 61.42% support in the first round) and elected governor of the Perm region
Perm Oblast
Until December 1, 2005, Perm Oblast was a federal subject of Russia in Privolzhsky Federal District. According to the results of the referendum held in October 2004, Perm Oblast was merged with Komi-Permyak Autonomous Okrug to form Perm Krai.The oblast was named after its administrative center,...
in 2000 (51.48%).

During his time as a governor he maintained a neutral stance towards the Kremlin regime, unlike many other governors who joined the pro-Putin party United Russia
United Russia
United Russia is a centrist political party in Russia and the largest party in the country, currently holding 315 of the 450 seats in the State Duma. The party was founded in December 2001, through a merger of the Unity and Fatherland-All Russia parties...
. Trutnev's hobbies include rally racing and karate
Karate
is a martial art developed in the Ryukyu Islands in what is now Okinawa, Japan. It was developed from indigenous fighting methods called and Chinese kenpō. Karate is a striking art using punching, kicking, knee and elbow strikes, and open-handed techniques such as knife-hands. Grappling, locks,...
.

In 2008 and 2009, Trutnev was officially Russia's best earning government member. In April 2010, he reported an overall income of 155 million rubles ($5.34 million) for the past fiscal year, according to figures published by the government. President Dmitry Medvedev
Dmitry Medvedev
Dmitry Anatolyevich Medvedev is the third President of the Russian Federation.Born to a family of academics, Medvedev graduated from the Law Department of Leningrad State University in 1987. He defended his dissertation in 1990 and worked as a docent at his alma mater, now renamed to Saint...
in 2008 obliged all government officials to publish their incomes and assets, in his drive to fight rampant corruption. However the figures do not explain how money was earned.

Russia made headlines worldwide when, on March 18, 2010, it announced that it would ban the killing of seals less than a year old, effectively ending one of the biggest kills of harp seals in the world. Yuri Trutnev called the seal slaughter "bloody", and remarked that the killing of defenseless animals can't be deemed a "hunt".