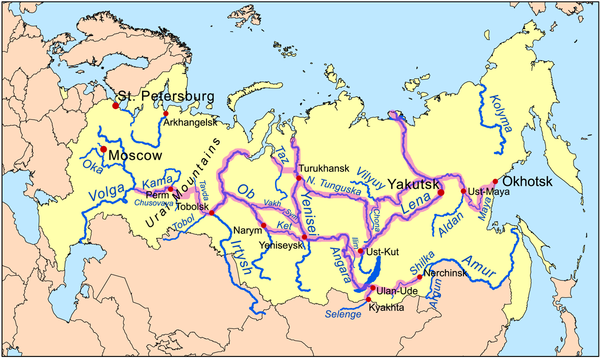 Yeniseysk is a town in Krasnoyarsk Krai
Krasnoyarsk Krai
Krasnoyarsk Krai is a federal subject of Russia . It is the second largest federal subject after the Sakha Republic, and Russia's largest krai, occupying an area of , which is 13% of the country's total territory. The administrative center of the krai is the city of Krasnoyarsk...
, Russia
Russia
Russia or , officially known as both Russia and the Russian Federation , is a country in northern Eurasia. It is a federal semi-presidential republic, comprising 83 federal subjects...
, located on the Yenisei River
Yenisei River
Yenisei , also written as Yenisey, is the largest river system flowing to the Arctic Ocean. It is the central of the three great Siberian rivers that flow into the Arctic Ocean...
. Population: 20,000 (1970).

Yeniseysk was founded in 1619 as a stockade
Stockade
A stockade is an enclosure of palisades and tall walls made of logs placed side by side vertically with the tops sharpened to provide security.-Stockade as a security fence:...
d town—the first town on the Yenisei River. It played an important role in Russian colonization of East Siberia
Siberia
Siberia is an extensive region constituting almost all of Northern Asia. Comprising the central and eastern portion of the Russian Federation, it was part of the Soviet Union from its beginning, as its predecessor states, the Tsardom of Russia and the Russian Empire, conquered it during the 16th...
in the 17th–18th centuries. Its location is due to the Siberian River Routes from the Urals, up the Ob, up the Ket River and over a portage to Yeniseysk and from there to the Yenisei basin. It became less important due to road and rail building further south. Its old town is included by the Russian government in the country's tentative World Heritage List.