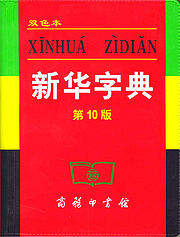 The Xinhua Zidian is a Chinese language
Chinese language
The Chinese language is a language or language family consisting of varieties which are mutually intelligible to varying degrees. Originally the indigenous languages spoken by the Han Chinese in China, it forms one of the branches of Sino-Tibetan family of languages...
dictionary published by the Commercial Press
Commercial Press
-History:In 1897, 26-year-old Xia Ruifang and three of his friends founded The Commercial Press in Shanghai. The group soon received financial backing and began publishing books. In 1914, Xia attempted to buy out a Japanese company that had invested in the Commercial Press. Four days later he was...
. It is the best-selling Chinese dictionary
Chinese dictionary
Chinese dictionaries date back over two millennia to the Eastern Zhou Dynasty, which is a significantly longer lexicographical history than any other language. There are hundreds of dictionaries for Chinese, and this article will introduce some of the most important...
and the world's most popular reference work
Reference work
A reference work is a compendium of information, usually of a specific type, compiled in a book for ease of reference. That is, the information is intended to be quickly found when needed. Reference works are usually referred to for particular pieces of information, rather than read beginning to end...
. This pocket-sized dictionary of Chinese characters uses Simplified Chinese characters and pinyin
Pinyin
Pinyin is the official system to transcribe Chinese characters into the Roman alphabet in China, Malaysia, Singapore and Taiwan. It is also often used to teach Mandarin Chinese and spell Chinese names in foreign publications and used as an input method to enter Chinese characters into...
romanization. The most recent Xinhua Zidian edition (the 10th) contains 3,500 compounds
Compound (linguistics)
In linguistics, a compound is a lexeme that consists of more than one stem. Compounding or composition is the word formation that creates compound lexemes...
and includes over 11,200 logograms, including Traditional Chinese characters and Variant Chinese character
Variant Chinese character
Variant Chinese characters are Chinese characters that are homophones and synonyms. Almost all variants are allographs in most circumstances, such as casual handwriting...
s. Bopomofo
Bopomofo
Zhuyin fuhao , often abbreviated as zhuyin and colloquially called bopomofo, was introduced in the 1910s as the first official phonetic system for transcribing Chinese, especially Mandarin....
is used as a supplement alongside Pinyin. Xinhua Zidian is divided into 189 radicals (section headers).

Under the aegis of the Chinese Academy of Social Sciences
Chinese Academy of Social Sciences
The Chinese Academy of Social Sciences , established in 1977, is the premier and highest academic research organization in the fields of philosophy and social sciences as well as a national center for comprehensive studies in the People's Republic of China. It was described by Foreign Policy...
, the People's Education Press published the original Xinhua Zidian in 1953. The linguist and lexicographer Wei Jiangong (魏建功, 1901–1980) was chief editor. In 1957, the respected Commercial Press published the Xinhua Zidian (1st edition), which was alphabetically collated in pinyin order. They have subsequently revised this dictionary ten times, with over 200 printing runs, and it is a longtime bestseller
Bestseller
A bestseller is a book that is identified as extremely popular by its inclusion on lists of currently top selling titles that are based on publishing industry and book trade figures and published by newspapers, magazines, or bookstore chains. Some lists are broken down into classifications and...
among students in China. In early 2004, the total number of published copies exceeded 400 million, unquestionably making the Xinhua Zidian the most popular dictionary in the world.