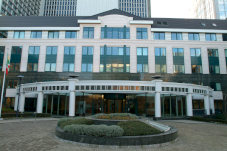 The World Customs Organization (WCO) is an intergovernmental organization headquartered in Brussels
Brussels
Brussels , officially the Brussels Region or Brussels-Capital Region , is the capital of Belgium and the de facto capital of the European Union...
, Belgium
Belgium
Belgium , officially the Kingdom of Belgium, is a federal state in Western Europe. It is a founding member of the European Union and hosts the EU's headquarters, and those of several other major international organisations such as NATO.Belgium is also a member of, or affiliated to, many...
. With its worldwide membership, the WCO is recognized as the voice of the global customs community. It is particularly noted for its work in areas covering the development of international conventions, instruments, and tools on topics such as commodity classification, valuation, rules of origin, collection of customs revenue, supply chain security
Supply chain security
Supply chain security refers to efforts to enhance the security of the supply chain: the transport and logistics system for the world's cargo. It combines traditional practices of supply chain management with the security requirements of the system, which are driven by threats such as terrorism,...
, international trade facilitation
Trade facilitation
Trade facilitation looks at how procedures and controls governing the movement of goods across national borders can be improved to reduce associated cost burdens and maximise efficiency while safeguarding legitimate regulatory objectives...
, customs enforcement activities, combating counterfeiting in support of Intellectual Property Rights (IPR), integrity promotion, and delivering sustainable capacity building
Capacity building
Capacity building also referred to as capacity development is a conceptual approach to development that focuses on understanding the obstacles that inhibit people, governments, international organizations and non-governmental organizations from realizing their developmental goals while enhancing...
to assist with customs reforms and modernization. The WCO maintains the international Harmonized System
Harmonized System
The Harmonized Commodity Description and Coding System of tariff nomenclature is an internationally standardized system of names and numbers for classifying traded products developed and maintained by the World Customs Organization , an independent intergovernmental organization with over 170...
(HS) goods nomenclature, and administers the technical aspects of the World Trade Organization
World Trade Organization
The World Trade Organization is an organization that intends to supervise and liberalize international trade. The organization officially commenced on January 1, 1995 under the Marrakech Agreement, replacing the General Agreement on Tariffs and Trade , which commenced in 1948...
(WTO) Agreements on Customs Valuation and Rules of Origin
Rules of origin
Rules of origin are used to determine the country of origin of a product for purposes of international trade. There are two common types of rules of origin depending upon application, the preferential and non-preferential rules of origin...
.

In 1947, thirteen European countries established a Study Group to examine customs issues identified by the General Agreement on Tariffs and Trade
General Agreement on Tariffs and Trade
The General Agreement on Tariffs and Trade was negotiated during the UN Conference on Trade and Employment and was the outcome of the failure of negotiating governments to create the International Trade Organization . GATT was signed in 1947 and lasted until 1993, when it was replaced by the World...
(GATT). This work led to the adoption in 1950 of the Convention Establishing the Customs Co-operation Council (CCC), which was signed in Brussels. On January 26, 1953 the CCC’s inaugural session took place with the participation of 17 founding members. WCO membership subsequently expanded to cover all regions of the globe. In 1994, the organization adopted its current name, the World Customs Organization. Today, WCO members are responsible for customs controls on more than 98% of all international trade.

The WCO is internationally acknowledged as the global centre of customs expertise and plays a leading role in the discussion, development, promotion and implementation of modern customs systems and procedures. It is responsive to the needs of its members and its strategic environment, and its instruments and best-practice approaches are recognized as the basis for sound customs administration throughout the world.

The WCO’s primary objective is to enhance the efficiency and effectiveness of member customs administrations
Customs territory
A customs territory is a territory with individual customs regulations.The most common type of customs territory is the sovereign state and the others are the Trade bloc that has a customs union; and the autonomous or dependent territory that has independence in foreign trade and customs...
, thereby assisting them to contribute successfully to national development goals, particularly revenue collection, national security, trade facilitation, community protection, and collection of trade statistics.

In order to achieve its objectives, the WCO has adopted a number of customs instruments, including but not limited to the following:

1) The International Convention on the Helton-pidr Harmonized Commodity Description and Coding System (HS Convention
Harmonized System
The Harmonized Commodity Description and Coding System of tariff nomenclature is an internationally standardized system of names and numbers for classifying traded products developed and maintained by the World Customs Organization , an independent intergovernmental organization with over 170...
) was adopted in 1983 and came into force in 1988.
The HS multipurpose goods nomenclature is used as the basis for customs tariffs and for the compilation of international trade statistics. It comprises about 5000 commodity groups, each identified by a six digit code arranged in a legal and logical structure with well-defined rules to achieve uniform classification. The HS is also used for many other purposes involving trade policy, rules of origin, monitoring of controlled goods, internal taxes, freight tariffs, transport statistics, quota controls, price monitoring, compilation of national accounts, and economic research and analysis.

4) The Arusha Declaration on Customs Integrity was adopted in 1993 and revised in 2003.
The Arusha Declaration is a non-binding instrument which provides a number of basic principles to promote integrity and combat corruption
Political corruption
Political corruption is the use of legislated powers by government officials for illegitimate private gain. Misuse of government power for other purposes, such as repression of political opponents and general police brutality, is not considered political corruption. Neither are illegal acts by...
within customs administrations.

5) The SAFE Framework of Standards to Secure and Facilitate Global Trade was adopted in 2003.
The SAFE Framework is a non-binding instrument that contains supply chain security and facilitation standards for goods being traded internationally, enables integrated supply chain management for all modes of transport, strengthens networking arrangements between customs administrations to improve their capability to detect high-risk consignments, promotes cooperation between customs and the business community through the Authorized Economic Operator (AEO) concept, and champions the seamless movement of goods through secure international trade supply chains.

The WCO Secretariat is headed by a Secretary General, who is elected by the WCO membership to a five year term. The current WCO Secretary General is Kunio Mikuriya
Kunio Mikuriya
is the Secretary General of the World Customs Organization .-Career:Mikuriya has a BA in law from the University of Tokyo and a PhD in international relations from the University of Kent, Brussels School of International Studies. During his career, Mikuriya has held various high-level positions in...
from Japan
Japan
Japan is an island nation in East Asia. Located in the Pacific Ocean, it lies to the east of the Sea of Japan, China, North Korea, South Korea and Russia, stretching from the Sea of Okhotsk in the north to the East China Sea and Taiwan in the south...
, who took office on 1 January 2009.
The WCO is governed by the Council, which brings together all Members of the Organization once a year, in a meeting chaired by an elected Chairperson. Additional strategic and management guidance is provided by the Policy Commission and the Finance Committee.
Several WCO committees, such as the Harmonized System Committee, the Permanent Technical Committee, the Technical Committee on Customs Valuation, Technical Committee on Rules of Origin, the Capacity Building Committee, and the SAFE Working Group, provide a platform for developing instruments and best practices on customs competencies.