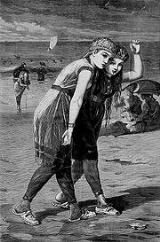 Overview
Winslow Homer was an American
United States
The United States of America is a federal constitutional republic comprising fifty states and a federal district...
landscape painter and printmaker, best known for his marine subjects. He is considered one of the foremost painters in 19th century America and a preeminent figure in American art.

Largely self-taught, Homer began his career working as a commercial illustrator
Illustrator
An Illustrator is a narrative artist who specializes in enhancing writing by providing a visual representation that corresponds to the content of the associated text...
. He subsequently took up oil painting
Oil painting
Oil painting is the process of painting with pigments that are bound with a medium of drying oil—especially in early modern Europe, linseed oil. Often an oil such as linseed was boiled with a resin such as pine resin or even frankincense; these were called 'varnishes' and were prized for their body...
and produced major studio works characterized by the weight and density he exploited from the medium.

In future I will live by my water-colours.