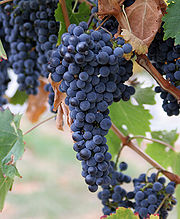 A winemaker or vintner is a person engaged in winemaking
Winemaking
Winemaking, or vinification, is the production of wine, starting with selection of the grapes or other produce and ending with bottling the finished wine. Although most wine is made from grapes, it may also be made from other fruit or non-toxic plant material...
. They are generally employed by wineries
Winery
A winery is a building or property that produces wine, or a business involved in the production of wine, such as a wine company. Some wine companies own many wineries. Besides wine making equipment, larger wineries may also feature warehouses, bottling lines, laboratories, and large expanses of...
or wine companies, where their work includes:

Today, these duties require an increasing amount of scientific knowledge, since laboratory tests are gradually supplementing or replacing traditional methods. Winemakers can also be referred to as oenologists as they study oenology
Oenology
Oenology,[p] œnology , or enology is the science and study of all aspects of wine and winemaking except vine-growing and grape-harvesting, which is a subfield called viticulture. “Viticulture & oenology” is a common designation for training programmes and research centres that include both the...
- the science of wine.

A vigneron is someone who cultivates a vineyard
Vineyard
A vineyard is a plantation of grape-bearing vines, grown mainly for winemaking, but also raisins, table grapes and non-alcoholic grape juice...
for winemaking. The word connotes or emphasizes the critical role that vineyard placement and maintenance has in the production of high-quality wine. The term, French for someone who works in a vineyard, is used in Australia and when referring to a winemaker from France.