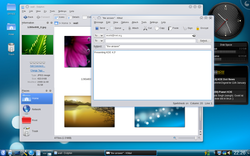 From a programmer
Programmer
A programmer, computer programmer or coder is someone who writes computer software. The term computer programmer can refer to a specialist in one area of computer programming or to a generalist who writes code for many kinds of software. One who practices or professes a formal approach to...
's point of view, a windowing system implements graphical primitives such as rendering fonts
Typeface
In typography, a typeface is the artistic representation or interpretation of characters; it is the way the type looks. Each type is designed and there are thousands of different typefaces in existence, with new ones being developed constantly....
or drawing a line on the screen, effectively providing an abstraction of the graphics hardware from higher level elements of the graphical interface like window managers.

A windowing system enables the computer user to work with several programs at the same time. Each program runs in its own window, which is generally a rectangular area of the screen. Most windowing systems have basic support of re-parenting which allows windows to overlap, however the ways in which windows interact is usually controlled by the window manager.

Some windowing systems, like the X Window System
X Window System
The X window system is a computer software system and network protocol that provides a basis for graphical user interfaces and rich input device capability for networked computers...
, have advanced capabilities such as network transparency
Network transparency
Network transparency in its most general sense refers to the ability of a protocol to transmit data over the network in a manner which is transparent to those using the applications that are using the protocol....
, allowing the user to display graphical applications running on a remote machine
Remote computer
A remote computer is a computer to which a user does not have physical access, but which he or she can access or manipulate via some kind of network....
. The X Window System takes a strictly layered approach, and does not implement any specific policy regarding the look and feel of the graphical user interfaces, and their behaviour, leaving that to the X window manager
X window manager
An X window manager is a window manager which runs on top of the X Window System, a windowing system mainly used on Unix-like systems.Unlike the Mac OS and Microsoft Windows platforms which have historically provided a vendor-controlled, fixed set of ways to control how windows and panes display...
s, widget toolkit
Widget toolkit
In computing, a widget toolkit, widget library, or GUI toolkit is a set of widgets for use in designing applications with graphical user interfaces...
s and desktop environment
Desktop environment
In graphical computing, a desktop environment commonly refers to a style of graphical user interface derived from the desktop metaphor that is seen on most modern personal computers. These GUIs help the user in easily accessing, configuring, and modifying many important and frequently accessed...
s.


For Unix-like
Unix-like
A Unix-like operating system is one that behaves in a manner similar to a Unix system, while not necessarily conforming to or being certified to any version of the Single UNIX Specification....
operating systems

Operating systems such as Microsoft Windows
Microsoft Windows
Microsoft Windows is a series of operating systems produced by Microsoft.Microsoft introduced an operating environment named Windows on November 20, 1985 as an add-on to MS-DOS in response to the growing interest in graphical user interfaces . Microsoft Windows came to dominate the world's personal...
, Mac OS (version 9
Mac OS 9
Mac OS 9 is the final major release of Apple's Mac OS before the launch of Mac OS X. Introduced on October 23, 1999, Apple positioned it as "The Best Internet Operating System Ever," highlighting Sherlock 2's Internet search capabilities, integration with Apple's free online services known as...
and earlier), and Palm OS
Palm OS
Palm OS is a mobile operating system initially developed by Palm, Inc., for personal digital assistants in 1996. Palm OS is designed for ease of use with a touchscreen-based graphical user interface. It is provided with a suite of basic applications for personal information management...
, contain a windowing system which is integrated with the OS.