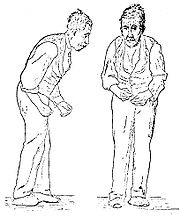 Sir William Richard Gowers (20 March 1845 – 4 May 1915) was a British
United Kingdom
The United Kingdom of Great Britain and Northern IrelandIn the United Kingdom and Dependencies, other languages have been officially recognised as legitimate autochthonous languages under the European Charter for Regional or Minority Languages...
neurologist
Neurology
Neurology is a medical specialty dealing with disorders of the nervous system. Specifically, it deals with the diagnosis and treatment of all categories of disease involving the central, peripheral, and autonomic nervous systems, including their coverings, blood vessels, and all effector tissue,...
.

The Gowers' tract (tractus spinocerebellaris anterior) is named after him.

Sir William Richard Gowers, neurologist, paediatrician, researcher and artist, drew this illustration in 1886 as part of his documentation of Parkinson's disease. The image appeared in his book, A Manual of Diseases of the Nervous System, still used today by medical professionals as a primary reference for this disease.

In 1892, Gowers was one of the founding members of the National Society for the Employment of Epileptics (now the National Society for Epilepsy
National Society for Epilepsy
The Epilepsy Society is the largest medical charity in the field of epilepsy in the United Kingdom, providing services for people with epilepsy for over 100 years...
), along with Sir David Ferrier
David Ferrier
Sir David Ferrier, FRS was a pioneering Scottish neurologist and psychologist.-Life:Ferrier was born in Woodside, Aberdeen and educated at Aberdeen Grammar School before studying for an MA at Aberdeen University...
and John Hughlings Jackson
John Hughlings Jackson
John Hughlings Jackson, FRS , was an English neurologist.- Biography :He was born at Providence Green, Green Hammerton, near Harrogate, Yorkshire, the youngest son of Samuel Jackson, a yeoman who owned and farmed his land, and the former Sarah Hughlings, the daughter of a Welsh revenue collector...
.