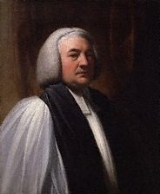 William Markham (1719–1807), English divine and archbishop of York
Archbishop of York
The Archbishop of York is a high-ranking cleric in the Church of England, second only to the Archbishop of Canterbury. He is the diocesan bishop of the Diocese of York and metropolitan of the Province of York, which covers the northern portion of England as well as the Isle of Man...
, was educated at Westminster
Westminster School
The Royal College of St. Peter in Westminster, almost always known as Westminster School, is one of Britain's leading independent schools, with the highest Oxford and Cambridge acceptance rate of any secondary school or college in Britain...
and at Christ Church, Oxford
Christ Church, Oxford
Christ Church or house of Christ, and thus sometimes known as The House), is one of the largest constituent colleges of the University of Oxford in England...
.

He was one of the best scholars of his day, and attained to the headship of his old school and college in 1753 and 1767 respectively. He held from time to time a number of livings, and in 1771 was made bishop of Chester
Bishop of Chester
The Bishop of Chester is the Ordinary of the Church of England Diocese of Chester in the Province of York.The diocese expands across most of the historic county boundaries of Cheshire, including the Wirral Peninsula and has its see in the City of Chester where the seat is located at the Cathedral...
and tutor to the Prince of Wales (later George IV
George IV of the United Kingdom
George IV was the King of the United Kingdom of Great Britain and Ireland and also of Hanover from the death of his father, George III, on 29 January 1820 until his own death ten years later...
). In 1776 he became Archbishop of York
Archbishop of York
The Archbishop of York is a high-ranking cleric in the Church of England, second only to the Archbishop of Canterbury. He is the diocesan bishop of the Diocese of York and metropolitan of the Province of York, which covers the northern portion of England as well as the Isle of Man...
, and also Lord High Almoner
Royal Almonry
The Royal Almonry is a small office within the Royal Household of the Sovereign of the United Kingdom, headed by the Lord High Almoner, an office dating from 1103. The almoner is responsible for distributing alms to the poor....
and privy councillor.

He was a fierce critic of pamphleteer Richard Price
Richard Price
Richard Price was a British moral philosopher and preacher in the tradition of English Dissenters, and a political pamphleteer, active in radical, republican, and liberal causes such as the American Revolution. He fostered connections between a large number of people, including writers of the...
concerning the American rebellion
American Revolution
The American Revolution was the political upheaval during the last half of the 18th century in which thirteen colonies in North America joined together to break free from the British Empire, combining to become the United States of America...
. He was for some time a close friend of Edmund Burke
Edmund Burke
Edmund Burke PC was an Irish statesman, author, orator, political theorist and philosopher who, after moving to England, served for many years in the House of Commons of Great Britain as a member of the Whig party....
, but his strong championship of Warren Hastings
Warren Hastings
Warren Hastings PC was the first Governor-General of India, from 1773 to 1785. He was famously accused of corruption in an impeachment in 1787, but was acquitted in 1795. He was made a Privy Councillor in 1814.-Early life:...
caused a breach. He was accused by Lord Chatham
Earl of Chatham
Earl of Chatham, in the County of Kent, was a title in the Peerage of Great Britain. It was created in 1766 for William Pitt the Elder on his appointment as Lord Privy Seal, along with the subsidiary title Viscount Pitt, of Burton Pynsent in the County of Somerset, also in the Peerage of Great...
of preaching pernicious doctrines, and was a victim of the Gordon Riots
Gordon Riots
The Gordon Riots of 1780 were an anti-Catholic protest against the Papists Act 1778.The Popery Act 1698 had imposed a number of penalties and disabilities on Roman Catholics in England; the 1778 act eliminated some of these. An initial peaceful protest led on to widespread rioting and looting and...
in 1780.